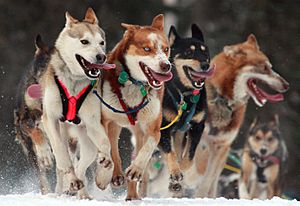 Ceremonial start of the Iditarod dog sled race in 2010

The Iditarod is the world’s most famous dog sled race. It is an annual race that starts on the first Saturday of March in Anchorage, Alaska and ends in Nome, Alaska. The annual race crosses the Alaska Range and Kuskokwim Mountains range. The contestants in the race go northwest from Anchorage. Then they turn north and go along the Bering Sea to Nome. On even years they take the route that goes more north and on odd years they take the route that goes more south. White Mountain is the last of three rest stops for teams in the race.

Iditarod is an endurance sport for the sled driver and the dogs. They have to keep moving for 1,100 miles. All the paths are cold, icy, and snowy. 12 to 16 dogs are in the race.

All content from Kiddle encyclopedia articles (including the article images and facts) can be freely used under Attribution-ShareAlike license, unless stated otherwise. Cite this article:
Iditarod Facts for Kids. Kiddle Encyclopedia.