Elim (Neviarcaurluq in Central Alaskan Yup'ik) is a city in Nome Census Area, Alaska, United States. At the 2010 census the population was 330.

According to the United States Census Bureau, the city has a total area of 2.4 square miles (6.2 km2), all of it land.

A number of flora and fauna are found in the Elim area. This is the westernmost location for the range of Black Spruce, Picea mariana.

There were 84 households out of which 60.7% had children under the age of 18 living with them, 57.1% were married couples living together, 15.5% had a female householder with no husband present, and 16.7% were non-families. 14.3% of all households were made up of individuals and 2.4% had someone living alone who was 65 years of age or older. The average household size was 3.73 and the average family size was 4.16. 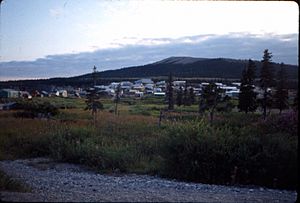 The Elim Airport is a state-owned airport with scheduled passenger flights. Also located in Elim is the Moses Point Airport, which is privately owned by the Elim Native Corporation.

In 2005, mining company Full Metal Minerals announced a partnership with Triex Minerals Corporation to develop a uranium deposit north of Elim. Development of the site began with survey and exploration work in Sept 2005. Initial drilling exploration was completed in July 2006, confirming deposits of "sandstone-hosted uranium" at the Boulder Creek site in Death Valley, north of Elim.

The Boulder Creek mine site is located on part of the Tubutulik River. Serious water and air pollution risks, including radioactive byproducts, have been identified with "in-situ leeching", the type of uranium mining proposed for the site. Villagers have raised concerns that radioactive by-products of uranium mining would adversely affect the plants, fish, and wildlife on which they rely. In September 2007, Irene Murray of Aniguiin High School in Elim wrote an open letter to Alaska Gov. Sarah Palin, drawing attention to projected impacts on the local environment and human health. Protests led by Elim Students Against Uranium (ESAU) have included demonstrations in 2008 and 2009 at the Iditarod Trail Sled Dog Race ceremonial start, and on the Iditarod trail in Elim.

The village has raised legal concerns over the project that include an alleged failure by the federal Bureau of Land Management to provide adequate public notice and public comment periods regarding the Boulder Creek mine project. Portions of the regulatory process are under the purview of the Nuclear Regulatory Commission.

All content from Kiddle encyclopedia articles (including the article images and facts) can be freely used under Attribution-ShareAlike license, unless stated otherwise. Cite this article:
Elim, Alaska Facts for Kids. Kiddle Encyclopedia.