Dallas Seavey is the youngest musher to compete in the Iditarod, beginning his first race on March 5, 2005, the day after turning 18. At the time, he ran his father's "puppy" team, a team of less-experienced dogs. He swiftly moved into the top ten by the 2009 Iditarod, and in 2012 became the youngest musher to win the Iditarod at age 25, with a finishing time of 9 days, 4 hours, 29 minutes, 26 seconds. 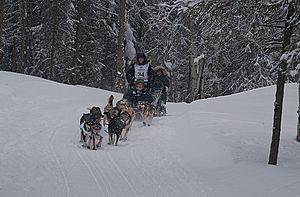 Dallas Seavey and his dog team mushing through Anchorage, Alaska during the ceremonial start of the 2012 Iditarod Trail Sled Dog Race

In 2015, Seavey won the Iditarod for a third time, in a race held from Fairbanks to Nome, with the official start moved due to a lack of snow in Southcentral Alaska.

In 2016, Dallas Seavey won the Iditarod for a fourth time, this time breaking his own record time. His time was 8 days, 11 hours, 20 minutes, and 16 seconds.

After the 2017 race, four of Seavey's dogs tested positive for a banned substance. Seavey denied any knowledge or involvement, speculating a rival had attempted to get him disqualified, and was ultimately cleared by the Iditarod Trail Committee. As a result, Seavey took a three-year break from the Iditarod. In 2018, the race also implemented more stringent measures to prevent tampering with dogs' food by sealing food drop bags with tamper-proof zipties and adding 24/7 surveillance to the Nome dog lot and three other checkpoints along the route.

In 2021, Seavey returned to the Iditarod, racing with a combined team of his father's dogs and his own, after Mitch Seavey announced he would sit out the race. Seavey won the slightly-shortened 2021 Iditarod in 7 days, 14 hours, 8 minutes, and 57 seconds, capturing his fifth championship and matching Rick Swenson for most Iditarod wins.

Dallas Seavey placed third in the 1,200-km Finnmarksløp in Norway in 2018, his first time competing in that event. He scratched in 2019, citing his dogs' health. He was registered to race in the 2020 Finnmarksløp, but ultimately did not run.

All content from Kiddle encyclopedia articles (including the article images and facts) can be freely used under Attribution-ShareAlike license, unless stated otherwise. Cite this article:
Dallas Seavey Facts for Kids. Kiddle Encyclopedia.