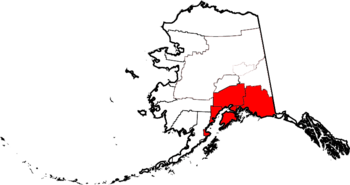 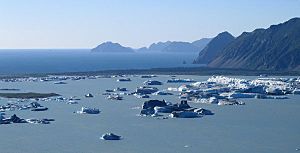 Bear Glacier Lake and Pacific Ocean in the Kenai Fjords

Southcentral Alaska is the portion of the U.S. state of Alaska consisting of the shorelines and uplands of the central Gulf of Alaska. Most of the population of the state lives in this region, concentrated in and around the city of Anchorage.

The climate of Southcentral Alaska is subarctic. Temperatures range from an average high of 65°F (18°C) in July to an average low of 10°F (-12°C) in December. The hours of daylight per day varies from 24 hours in June and July to 6 hours in December and January. The coastal areas consist of temperate rainforests and alder shrublands. The interior areas are covered by boreal forests.

The terrain of Southcentral Alaska is shaped by six mountain ranges:

Southcentral Alaska contains several dormant and active volcanoes. The Wrangell Volcanoes are older, lie in the East, and include Mount Blackburn, Mount Bona, Mount Churchill, Mount Drum, Mount Gordon, Mount Jarvis, Mount Sanford, and Mount Wrangell. The Cook Inlet volcanoes, located in the Tordrillo Mountains and in the north end of the Aleutian Range, are newer, lie in the West, and include Mount Redoubt, Mount Iliamna, Hayes Volcano, Mount Augustine, Fourpeaked Mountain and Mount Spurr. Most recently, Augustine and Fourpeaked erupted in 2006, and Mount Redoubt erupted in March 2009, resulting in airplane flight cancellations.

All content from Kiddle encyclopedia articles (including the article images and facts) can be freely used under Attribution-ShareAlike license, unless stated otherwise. Cite this article:
Southcentral Alaska Facts for Kids. Kiddle Encyclopedia.