Wasilla is a city in Matanuska-Susitna Borough, United States and the sixth-largest city in Alaska. It is located on the northern point of Cook Inlet in the Matanuska-Susitna Valley of the southcentral part of the state. The city's population was 7,831 at the 2010 census. Estimates in 2013 put the population at roughly 8,621. Wasilla is the largest city in the borough and a part of the Anchorage metropolitan area, which had an estimated population of 396,142 in 2013.

Established at the intersection of the Alaska Railroad and Old Carle Wagon Road, the city prospered at the expense of the nearby mining town of Knik. Historically entrepreneurial, the economic base shifted in the 1970s from small-scale agriculture and recreation to support for workers employed in Anchorage or on Alaska's North Slope oilfields and related infrastructure. The George Parks Highway turned the town into a commuter suburb of Anchorage. Several state and federal agencies have offices in Wasilla, including the Alaska Departments of Environmental Conservation, Labor and Divisions of Public Assistance, Social Services.

Wasilla gained international attention when Sarah Palin, who served as Wasilla's mayor before her election as Governor of Alaska, was chosen by John McCain as his vice-presidential running mate in the 2008 United States presidential election.

Wasilla is named after Chief Wasilla, a local Dena'ina chief. "Wasilla" is the anglicized spelling of the chief's Russian-given name, Васи́лий Vasilij, which corresponds to the English name Basil.

Glacial ice sheets covered most of the northern hemisphere during the last glacial period, between 26,500 and 19,000–20,000 years ago, until they disappeared between 10,000 and about 7,000 years ago. Early humans moved through the area and left evidence of their passage. The Matanuska-Susitna valley was eventually settled by the Dena'ina Alaska natives who utilized the fertile lands and fishing opportunities of Cook Inlet. The Dena'ina are one of the eleven sub-groups comprising the indigenous Athabaskan Indian groups extending down Canada's western coast. The area around downtown Wasilla was known to the Dena'ina as "Benteh", which translates as "among the lakes". Russians occupied Alaska from 1741, including strategic trading posts in Lower Cook Inlet, until Alaska's sale to the United States in 1867. Near the mouth of the Matanuska River, the town of Knik was settled about 1880. In 1900, the Willow Creek Mining District was established to the north and Knik thrived as a mining settlement. 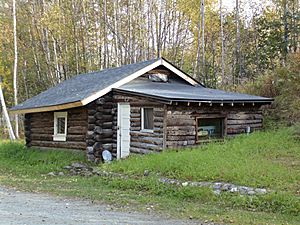 Cabin at the Knik Site

In 1917, the U.S. government planned the Alaska Railroad to intersect the Carle Wagon Road (present Wasilla-Fishhook Road) which connected Knik and the mines. Knik businesses and residents rushed to buy land nearby, and the town declined. Wasilla Station was named for the nearby Wasilla Creek. Local miners used the name "Wassila Creek", referring to Wassila, a chief of the Dena'ina. There are two sources cited for the name, one being derived from a Dena'ina word meaning "breath of air" while another stating Dena'ina derived it from the Russian name "Vasili." As Knik declined into a ghost town, Wasilla served early fur trappers and miners working the gold fields at Cache Creek and Willow Creek. More than 200 farm families from the Upper Midwest were moved into the Matanuska and Susitna valleys in 1935 as part of a U.S. government program to start a new farming community to counteract this trend; their linguistic influence is still audible in the region.

The area was a supply base for gold mines near Hatcher Pass through World War II. Until construction of the George Parks Highway around 1970, nearby Palmer was the leading city in the Matanuska Valley. Wasilla was at the end of the Palmer-Wasilla highway and the road to Big Lake provided access to land west of Wasilla. The Parks Highway put Wasilla at mile 40–42 of what became the major highway and railroad transportation corridor linking Southcentral Alaska to Interior Alaska. As a result, population growth and community development shifted from the Palmer area to Wasilla and the surrounding area. Wasilla was incorporated as a city in 1974. All non-borough municipalities throughout Alaska are designated cities.

In 1994, a statewide initiative to move Alaska's capital to Wasilla was defeated by a vote of about 116,000 to 96,000. About that time, the Matanuska Valley began to recover from an economic collapse, beginning a sustained boom that involved dramatic population growth, increased local employment, and a boom in residential and commercial real estate development. The local real estate market slowed in 2006. In 2008, suburban growth and dwindling snow forced organizers of the Iditarod Trail Sled Dog Race to bypass Wasilla permanently, due to a warming climate The race had its start in Wasilla from 1973 to 2002, the year when reduced snow cover forced a "temporary" change to Willow.

The Dena'ina (Tanaina) Native Americans called the area Benteh, meaning 'among the lakes'.

Located near Wasilla Lake and Lake Lucille, Wasilla is one of two cities in the Matanuska Valley. The community surrounds Mi. 39–46 of the George Parks Highway, roughly 43 highway miles (69.2 km) northeast of Anchorage. Nearly one third of the people of Wasilla drive the 40-minute commute to work in Anchorage every day. Six miles to the southeast is Mount POW/MIA.

There were 1,979 households out of which 43.5% had children under the age of 18 living with them, 50.2% were married couples living together, 13.8% had a female householder with no husband present, and 31.2% were non-families. 23.5% of all households were made up of individuals and 6.8% had someone living alone who was 65 years of age or older. The average household size was 2.76 and the average family size was 3.27. 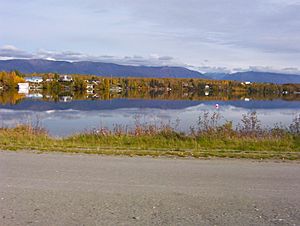 The Museum of Alaska Transportation and Industry in Wasilla was established in 1967, "to give a home to the transportation and industrial remnants and to tell the stories of the people and the machines that opened Alaska to exploration and growth."

In 2010, the Menard Center lost a tenant when the Arctic Predators did not play as a member of the Indoor Football League.

The George Parks Highway in conjunction with the Glenn Highway connects Wasilla to Anchorage and communities on the Kenai Peninsula. The Parks also links the Matanuska Valley to northward to the rest of the state and Canada. The Alaska Railroad serves Wasilla.

The city-owned Wasilla Airport, with a paved 3,700 foot (1,130 m) runway, provides air taxi services. The airport was formerly located in the city center before moving to a site on the western edge of the city during the 1980s. An anti-moose mat was installed around the runway in 2005, giving a light shock to animals which might otherwise wander into the path of moving aircraft. The old airport site is currently home to a city park. Wasilla also has eight public-use seaplane bases located on area lakes. Private-use air facilities registered with the FAA include 43 land-based airstrips, eight additional seaplane bases, two heliports and one STOLport.

All content from Kiddle encyclopedia articles (including the article images and facts) can be freely used under Attribution-ShareAlike license, unless stated otherwise. Cite this article:
Wasilla, Alaska Facts for Kids. Kiddle Encyclopedia.