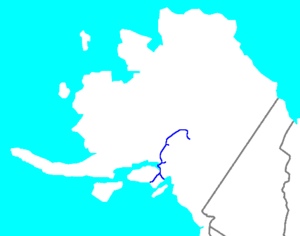 map of the Alaska Railroad 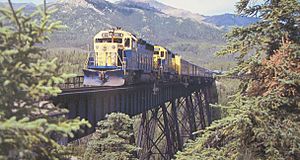 The Alaska Railroad is the main railroad in Alaska. It is owned by the state government of Alaska. It connects Alaska's two largest cities, Anchorage and Fairbanks. It also goes to Denali National Park, home of the tallest mountain in North America. There are short spur lines that go to North Pole, military bases, and through a tunnel to Whittier. It is not connected to any other railroads but it does go to the seaports in Seward, Anchorage, and Whittier and the big airport in Anchorage. Most railroads haul either people or freight, but the Alaska Railroad does both.

All content from Kiddle encyclopedia articles (including the article images and facts) can be freely used under Attribution-ShareAlike license, unless stated otherwise. Cite this article:
Alaska Railroad Facts for Kids. Kiddle Encyclopedia.