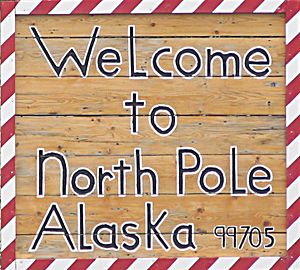 Frequently photographed "Welcome to North Pole" sign at the eastern end of Fifth Avenue, near its intersection with the Richardson Highway.

The name "North Pole" is often applied to the entire area covered by its zip code, 99705. This area stretches between Fort Wainwright and Eielson Air Force Base, and between the Chena River and the Tanana River, including subdivisions off of Badger Road, a loop road connecting the eastern edge of Fairbanks city limits with North Pole city limits, and in the nearby census-designated place of Moose Creek. Despite the name, the city is about 1,700 miles (2,700 km) south of Earth's geographic North Pole.

The city is a summertime attraction for tourists visiting nearby Fairbanks and, due to its location on the Richardson Highway, those traveling to and from the Alaska Highway and Valdez. North Pole is home to two oil refineries, the town's major industry aside from tourism. The larger refinery, operated by Flint Hills Resources, is a major source of jet fuel for Ted Stevens Anchorage International Airport. Tanker car traffic on the Alaska Railroad, entering and leaving the refinery, frequently bisects the city.

While the real North Pole has no terra firma many travelers discovered this town as an ideal way to finally visit the home of Santa Claus. This revelation made this small town in Alaska a must visit during the holidays causing the town to create more and more Santa Claus themed attractions. Its biggest attraction is a gift shop named Santa Claus House, the modern-day incarnation of a trading post established in the town's early days. The Santa Claus House is known for the world's largest fiberglass statue of Santa Claus outside.

Prior to Christmas each year, the USPS post office in North Pole receives hundreds of thousands of letters to Santa Claus, and thousands more from people wanting the town's postmark on their Christmas greeting cards to their families. It advertises the ZIP code 99705 as the ZIP code of Santa. A community program also responds to letters addressed to 1 Santa Claus Lane.

Christmas-themed streets in North Pole include Santa Claus Lane, St. Nicholas Drive, Snowman Lane, and Kris Kringle Drive. Street lights in the city are decorated in a candy cane motif, and many local businesses have similar decorations. The city's firetrucks and ambulances are all red, while the police cars are green and white. The city also has an all-female flat-track Roller Derby league, the North Pole Babes in Toyland (NPBT) whose athletes have Christmas and/or North Pole inspired Skater names.

North Pole has some of the least expensive residential real estate in Alaska; the median home price there is $211,184.

Main exit to North Pole off the Richardson Highway. Badger Road, a loop road off the Richardson between Fairbanks and North Pole, was named for Harry Markley Badger (1869-1965), a pioneer Fairbanks resident who established a farm along the road. Inside North Pole city limits, the road becomes Santa Claus Lane, one of many Christmas-themed streets in the city.

The Richardson Highway south of Fairbanks led to an assortment of subdivided and unsubdivided homesteads between Ladd Field and 26 Mile Field in the 1940s and 1950s.

The area that formed the central city of North Pole was homesteaded in 1944 by Bon V. and Bernice Davis. Their son, T. Neil Davis, wrote Battling Against Success in 1997, a fictionalized account of homestead life. The Alaska Railroad established a siding on the Davis homestead as part of its spur line to Eielson Air Force Base, naming the siding Davis. This name would temporarily become associated with the fledgling settlement.

In 1952, Dahl and Gaske Development Company purchased the Davis homestead, subdivided it, and renamed it North Pole, in hopes of attracting a toy manufacturer to the area. The City of North Pole was incorporated on January 15, 1953 from portions of the Davis homestead and the adjacent homestead of James Ford. Ford was named the first mayor, with Everett Dahl serving on the first city council.

Another member of that first council was Conrad B. Miller. Miller, who came to Fairbanks in 1949, opened a trading post along the highway in 1952. The business became known as the Santa Claus House, and has evolved over the years into the current roadside attraction. The business was also home to North Pole's first post office, serving in that capacity for almost 20 years. Another trading post in the community was operated by Lucius Cunningham and his family. The town was mostly centered around these two businesses until the 1970s, when the current four-lane Richardson Highway was built, bypassing Davis Subdivision, which was effectively its downtown.

The Earth Resources refinery (currently operated by Flint Hills Resources) began operations in August 1977. It is connected to the Trans-Alaska Pipeline System by several feeder pipelines operated by Golden Valley Electric Association, mostly following along the Laurence Road section line. The years which followed the pipeline's construction saw the construction of the North Pole Plaza, a large enclosed shopping mall along the Richardson Highway. A standalone high school and increased subdivision development in previously rural areas immediately outside of the city would follow before the real estate market temporarily collapsed during the 1980s.

An interchange was constructed along the Richardson, where the highway intersects with the eastern end of Badger Road and the northern end of Santa Claus Lane, during the early 1990s. In the late 2000s, the northern portion of Santa Claus Lane was rebuilt to accommodate three consecutive roundabouts, serving the interchange and a nearby frontage road intersection. Another interchange was constructed on the Richardson at Dawson Road, at the far eastern edge of city limits. These improvements eliminated a number of at-grade access points to the Richardson, which had accumulated a decades-long history of serious accidents.

The city government has had an often contentious history. A past mayor, Jeff Jacobson, was criticized for maintaining his full-time mayor's job while at the same time working full-time as a teacher at North Pole Middle School. In 2004, he sent a letter (and a lump of coal) to U.S. Senator John McCain about a comment he made regarding why the city's "elves" needed money for a recreation project that he considered a pork barrel project.

In 2014, Americans for Prosperity quickly pulled an ad campaign in Alaska, after Koch Industries closed the Flint Hills Resources Refinery in North Pole. The refinery is being closed due to environmental remediation costs.

Temperatures in North Pole are heavily affected by the amount of sunlight with almost no lag effect from solar radiation. North Pole's Santa Claus House is actually closed during the week in January and February due to extreme cold in those months. Due to being landlocked and protected by mountain ranges from marine influences, North Pole, much like the rest of the Alaskan Interior, sees little seasonal lag and much greater seasonal temperature swings than areas along the coast such as Anchorage, with winters that can dip to many tens of degrees below zero F with average lows remaining below 0 from November 5 to March 18, and summers that see many days in the 70s, 80s, and on occasion, even 90s F.

There were 605 households, out of which 38.5% had children under the age of 18 living with them, 47.9% were married couples living together, 11.4% had a female householder with no husband present, and 26.9% were non-families. 26.9% of all households were made up of individuals, and 4.6% had someone living alone who was 65 years of age or older. The average household size was 2.58 and the average family size was 3.19. 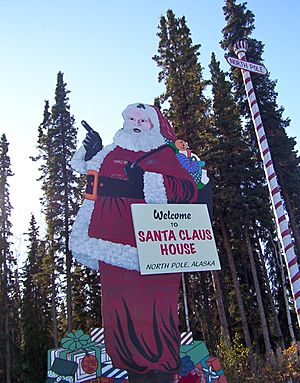 The Santa Claus House is a local landmark.

All content from Kiddle encyclopedia articles (including the article images and facts) can be freely used under Attribution-ShareAlike license, unless stated otherwise. Cite this article:
North Pole, Alaska Facts for Kids. Kiddle Encyclopedia.