Cordova is a small town located near the mouth of the Copper River in the Valdez-Cordova Census Area, Alaska, United States, at the head of Orca Inlet on the east side of Prince William Sound. The population was 2,239 at the 2010 census. Cordova was named Puerto Cordova by Spanish explorer Salvador Fidalgo in 1790. No roads connect Cordova to other Alaskan towns, so a plane or ferry is required to travel there. In the Exxon Valdez oil spill of March 1989, an oil tanker ran aground northwest of Cordova, heavily damaging ecology and fishing. 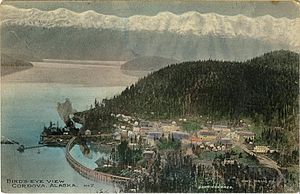 In 1790 the inlet in front of the current Cordova townsite was named Puerto Cordova by Spanish explorer Salvador Fidalgo, after Spanish admiral Luis de Córdova y Córdova. The town of Cordova was named after it, although the inlet itself was later renamed the Orca Inlet. Cordova proper was founded as a result of the discovery of high-grade copper ore at Kennecott, north of Cordova. A group of surveyors from Valdez laid out a town site and Michael James Heney purchased half the land for the terminus of the Copper River and Northwestern Railway after determining that Katalla was a poor harbor. Heney and his crew held a brief ceremony to organize the town on March 26, 1906. A week later crews arrived to begin work on the railroad. The first lots in the new town site, which make up the heart of present-day Cordova, were sold at auction in May 1908. As the railroad grew, so did the town. Eventually schools, businesses, a hospital, and utilities were established. After the railroad was completed Cordova became the transportation hub for the ore coming out of Kennecott. In the years 1911 to 1938, more than 200 million tons of copper ore was transported through Cordova.

The area around Cordova was historically home to the Eyak, with a population of Chugach to the west, and occasional visits from Ahtna and Tlingit people for trade or battle. The last full-blooded Eyak died in 2008, but the native traditions and lifestyle still has an influence on the local culture. Today Cordova is populated with a mix of races, including Aleut Natives, Filipinos, and Caucasian European – North Americans.

Cordova was also once the home of a booming razor clam industry, and between 1916 and the late 1950s it was known as the "Razor Clam Capital of the World". Commercial harvest in the area was as much as 3.5 million pounds. Returns began declining in the late 1950s, presumably due to overharvesting and a large die-off in 1958. The 1964 Good Friday earthquake effectively and completely obliterated the industry; in some areas, the ground was thrust up by as much as six feet, exposing the already depleted clam beds. There has been no commercial harvest in the area since 1988 with the exception of a brief harvest in 1993.

In March 1989 the Exxon Valdez oil tanker ran aground on Bligh Reef northwest of Cordova causing one of the most devastating environmental disasters in North America. The Exxon Valdez oil spill severely affected the area's salmon and herring populations leading to a recession of the local fishing-reliant economy as well as disrupting the general ecology of the area. After many years of litigation, 450 million dollars were awarded for compensatory and punitive damages.

There were 958 households out of which 36.1% had children under the age of 18 living with them, 49.5% were married couples living together, 8.1% had a female householder with no husband present, and 37.6% were non-families. 30.3% of all households were made up of individuals and 5.4% had someone living alone who was 65 years of age or older. The average household size was 2.48 and the average family size was 3.17.

Cordova has a subpolar oceanic climate (Cfc) according to the Köppen climate classification system, with cool temperatures and heavy rainfall caused by orographic lift. Westerly winds coming off the North Pacific Ocean are forced upwards by the Chugach Mountains, which causes the air mass to cool and creates clouds and precipitation. The yearly average rainfall is 89 inches, (226 cm) with 125 rainy days out of the year. Snow falls mostly from December to March, on an average of 127 inches (323 cm) falls yearly. Winter temperatures reach lows of 15 °F (−9.5 °C) and the warmest summer temperatures are around 70 °F .

Various festivals and celebrations take place throughout the year. The Copper River Delta Shorebird Festival, hosted by the Cordova Chamber of Commerce, takes place each year in early May. Millions of migrating shorebirds stop in the area to rest and feed before finishing their journey north. The most numerous species are the western sandpiper, least sandpiper, and dunlin. This is a popular time for avid and casual bird watchers to visit. Activities, workshops, and bird watching tours are held throughout the week.

The Cordova Iceworm Festival takes place each February and is an effective way to thwart the winter blues. Activities include a parade, talent show, royal crowning ceremony, and various competitions such as an oyster shucking contest, ping pong tournament, and a survival suit race.

Copper River Wild Salmon Festival takes place in July at the Mt. Eyak ski area and includes various events. Salmon Jam Music Festival serves as one of the main events and a fund raiser for Cordova Arts, where local musicians perform followed by professional acts and takes place over the course of Friday and Saturday nights. Taste of Cordova, a wild food and Copper River salmon cook off, usually starts the events. Entries are made with a variety of wild, locally harvested foods and are judged by a panel of guest chefs and food writers. The Alaska Salmon Runs start Saturday morning and include a marathon, half marathon, 10k, 5k, and a 1-mile race on the Copper River Highway. Small Fry activities are educational events for children and families that take place during the races.

The Cordova Historical Museum has exhibits on the Copper River and Northwestern Railway, the local fishing industry, and Alaska Natives. They also host a juried art show called "Fish Follies".

The Ilanka Cultural Center museum features exhibits on Eyak, Alutiiq, Ahtna and Tlingit history and contemporary life – including artifacts, photographs, and oral histories. The 24-1/2-foot orca whale, Eyak, is one of only five fully rearticulated orca whale skeletons in the world.

The Cordova Ikumat Alutiiq group was formed in 1995, composed of youth and adults, and is open to anyone who wants to join; the group performs songs from the past as well as original pieces. The Ilanka Cultural Center offers traditional arts and skills still practiced including skin sewing, beadwork; mask, totem, and ivory carving; "putting up" fish and deer; berry-picking and jam-making; and subsistence and commercial fishing.

In late 2010, clearing the site and construction of a 33,929-square-foot (3,152.1 m2) community center, to be named the Cordova Center, began. The Cordova Center hosts a new library, museum, auditorium, conference and meeting space, plus city hall offices. It was finally opened in the winter of 2015 for the residents of Cordova. Various events take place in the walls of this building, such as community movie nights in the theater, winter bazaars, art shows, and many more.

Skiing is a popular activity in the winter. The surrounding Chugach Mountains provide excellent back country ski slopes. The Mt. Eyak ski area operates a single chair ski lift and rope tow. It is the oldest working ski lift in North America. The heliskiing company Points North operate out of Orca Adventure Lodge in Cordova. Snowshoeing and ice skating are very popular sports around the Cordova area when conditions are right.

Hiking is available year-round on many trails. Some are within walking distance of town while many others are a leisurely drive away."Easy Trails"are

In the summer kayaking in Prince William Sound is popular. of the western Sound are designated as the Nellie Juan College Fjord Wilderness Study Area.

Indoor recreation includes the Bob Korn Memorial Pool, and the Bidarki Fitness Center, which has a gym with basketball court upstairs, a weight room, and multiple spaces with cardio training equipment 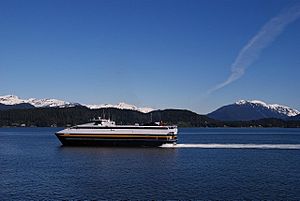 M/V Fairweather, sistership to the M/V Chenega which operates in Cordova

Despite being on the mainland, Cordova is only accessible via boat or aircraft, as there is no road connecting the town to any other town. It was previously accessible by railroad however the railway is no longer in use largely due to the 1964 Good Friday earthquake and the resulting destruction it caused to the Million Dollar Bridge. The longest road is the Copper River Highway which follows the old railbed of the Copper River and Northwestern Railway for 49.5 miles (79.7 km). The first 11 miles (17.7 km) north of Cordova is paved and the rest is gravel. As of the summer of 2011, vehicle traffic can only reach the 36 mile mark as changes in the river course washed out the 339 bridge. The following 13.5 miles may still be accessed via a river crossing by boat. Cars and trucks can be transported to Cordova by ferry. Regular ferry service is provided by the state owned, Alaska Marine Highway System to Valdez and Whittier with whistle stops (the ferry only stops if there are prior reservations) in Tatitlek and Chenega Bay. The M/V Aurora operates in Prince William Sound year round and the high-speed M/V Chenega operates the area in the summer.

Cordova has two airports. Merle K. (Mudhole) Smith Airport is a state-owned airport located 11 miles (17.7 km) east of the town center. It has regular jet service provided by Alaska Airlines as well as regular service by Era Aviation. Its main runway is 7500 feet (2286 m) long with an asphalt surface. The Cordova Municipal Airport is 1-mile (1.8 km) from the town and is also state owned. It is located on Lake Eyak which also has a seaplane landing area. The sole runway has a length of 1,800 feet (550 m) with a gravel surface. The municipal airport is mostly used by air taxis and personal aircraft.

All content from Kiddle encyclopedia articles (including the article images and facts) can be freely used under Attribution-ShareAlike license, unless stated otherwise. Cite this article:
Cordova, Alaska Facts for Kids. Kiddle Encyclopedia.