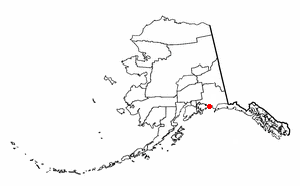 Orca Inlet is an arm of Prince William Sound in southern Alaska. The town of Cordova was founded on its coast in 1906. All marine traffic reaches the town through Orca Inlet. 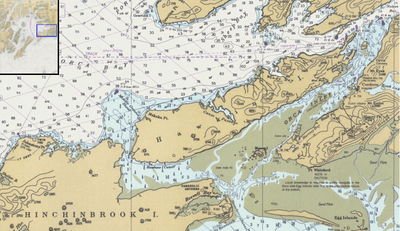 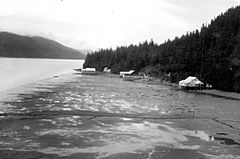 The city of Cordova, Alaska is situated on the southeast shore of Orca Inlet.

Orca Inlet was listed in the Geographic Dictionary of Alaska in 1906, citing J.F. Moser's report from 1897. The Orca Cannery operated on the south shore of the inlet; there was a post office at that location from 1894. The Odiak Cannery was located 3 miles (4.8 km) southwest of Orca, at the present location of Cordova.

There were once large Pacific razor clam beds in the intertidal zones of Orca Inlet which were harvested and shipped out of Cordova. Harvests reached 3.5 million pounds (1.6 million kilograms) at its peak. Populations began to decline in the late 1950s. When the 1964 Good Friday earthquake struck the clam beds were uplifted around 6 feet (1.8 m) exposing them out of the intertidal zone. This led to moderate mortality and eventually the industry crashed.

Like other arms of Prince William Sound, Orca Inlet is a fjord. There are large areas on its coast with large rounded rocks as well as many cirques and hanging valleys. Glacial erosion created steep walls on the sides of the fjord. In one area the elevation rises to 1,600 feet (490 m) within 1⁄2 mile (0.80 km) of the coastline. The southern and central areas are filled with sediment making the area very shallow. These deposits resulted from the receded glacier that once filled the fjord as well as current inflow through the seaward end of the inlet from the Copper River and other smaller glacial streams. These deposits drift westward along the coast until they reach the entrance of Orca Inlet. Orca Inlet can serve as an entrance to Prince William Sound from the Gulf of Alaska but the shallow water limits the size of vessels that can use the route. In 1914, the southern two-thirds of the inlet was generally 12 feet (3.7 m) deep or less with a few, discontinuous channels, while the north part was 90 to 228 feet (27 to 69 m) deep.

Copper ore has been found in the area around Orca Inlet but there has been little development to mine it.

All content from Kiddle encyclopedia articles (including the article images and facts) can be freely used under Attribution-ShareAlike license, unless stated otherwise. Cite this article:
Orca Inlet Facts for Kids. Kiddle Encyclopedia.