The Chugach Mountains in southcentral Alaska are the farthest north of the mountain ranges that make up the Pacific Coast Ranges of western North America. The range is about 500 km (300 mi) long. Its highest point is Mount Marcus Baker, at 13,176 feet (4,016 m), but most of its summits are not very high. Because of the wet weather on the coast, these mountains get a lot of snow.

There are several parks in and around the mountains, like Chugach State Park the Chugach National Forest, and the Kenai National Wildlife Refuge. They are popular destinations for outdoor activities. The World Extreme Skiing Championship is held yearly in the Chugach near Valdez.

Three highways run through the Chugach Mountains. There is also a tunnel from Portage that lets cars and trains go under the mountains to Whittier.

The name "Chugach" is from the Eskimo tribal name Chugachmiut recorded by the Russians and written by them "Chugatz" and "Tchougatskoi"; in 1898 U.S. Army Captain W. R. Abercrombie spelled the name "Chugatch" and applied it to the mountains. 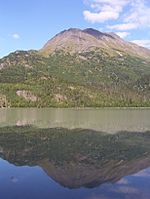 A peak in the Chugach Mountains

Some of the taller mountains in this range are:

All content from Kiddle encyclopedia articles (including the article images and facts) can be freely used under Attribution-ShareAlike license, unless stated otherwise. Cite this article:
Chugach Mountains Facts for Kids. Kiddle Encyclopedia.