Kennecott, also known as Kennecott Mines or AHRS Site No. XMC-001, is an abandoned mining camp in the Valdez-Cordova Census Area in the U.S. state of Alaska that was the center of activity for several copper mines. It is located beside the Kennicott Glacier, northeast of Valdez, inside Wrangell-St. Elias National Park and Preserve. The camp and mines are now a National Historic Landmark District administered by the National Park Service.

It was declared a National Historic Landmark in 1986.

In the summer of 1900, two prospectors, "Tarantula" Jack Smith and Clarence L. Warner, a group of prospectors associated with the McClellan party, spotted "a green patch far above them in an improbable location for a grass-green meadow." The green turned out to be malachite, located with chalcocite (aka "copper glance"), and the location of the Bonanza claim. A few days later, Arthur Coe Spencer, U.S. Geological Survey geologist independently found chalcocite at the same location.

Stephen Birch, a mining engineer just out of school, was in Alaska looking for investment opportunities in minerals. He had the financial backing of the Havemeyer Family, and another investor named James Ralph, from his days in New York. Birch spent the winter of 1901-1902 acquiring the "McClellan group's interests" for the Alaska Copper Company of Birch, Havemeyer, Ralph and Schultz, later to become the Alaska Copper and Coal Company. In the summer of 1901, he visited the property and "spent months mapping and sampling." He confirmed the Bonanza was, at the time, the richest known concentration of copper in the world.

By 1905, Birch had successfully defended the legal challenges to his property and he began the search for capital to develop the area. On 28 June 1906, he entered into "an amalgamation" with the Daniel Guggenheim and J.P. Morgan & Co., known as the Alaska Syndicate, eventually securing over $30 million. The capital was to be used for constructing a railway, a steamship line, and development of the mines. In Nov. 1906, the Alaska Syndicate bought a 40 percent interest in the Bonanza Mine from the Alaska Copper and Coal Company and a 46.2 percent interest in the railroad plans of John Rosene's Northwestern Commercial Company.

Political battles over the mining and subsequent railroad were fought in the office of U.S. President Theodore Roosevelt between conservationists and those having a financial interest in the copper.

The Alaska Syndicate's traded its Wrangell Mountains Mines assets for shares in the Kennecott Copper Corporation, a "new public company" formed on 29 April 1915. A similar transaction followed with the CR&NW railway and the Alaska Steamship Company. Birch was the managing partner for the Alaska operation.

Kennecott Mines was named after the Kennicott Glacier in the valley below. The geologist Oscar Rohn named the glacier after Robert Kennicott during the 1899 US Army Abercrombie Survey. A "clerical error" resulted in the substitution of an "e" for the "i", supposedly by Stephen Birch himself.

Kennecott had five mines: Bonanza, Jumbo, Mother Lode, Erie and Glacier. Glacier, which is really an ore extension of the Bonanza, was an open-pit mine and was only mined during the summer. Bonanza and Jumbo were on Bonanza Ridge about 3 mi (4.8 km) from Kennecott. The Mother Lode mine was located on the east side of the ridge from Kennecott. The Bonanza, Jumbo, Mother Lode and Erie mines were connected by tunnels. The Erie mine was perched on the northwest end of Bonanza Ridge overlooking Root Glacier about 3.7 mi (6.0 km) up a glacial trail from Kennecott. Ore was hoisted to Kennecott via the trams which head-ended at Bonanza and Jumbo. From Kennecott the ore was hauled mostly in 140-pound sacks on steel flat cars to Cordova, 196 rail miles away on the Copper River and Northwestern Railway (CRNW).

In 1911 the first shipment of ore by train transpired. Before completion, the steamship Chittyna carried ore to the Abercrombie landing by Miles Glacier. Initial ore shipments contained "72 percent copper and 18 oz. of silver per ton."

In 1916, the peak year for production, the mines produced copper ore valued at $32.4 million. 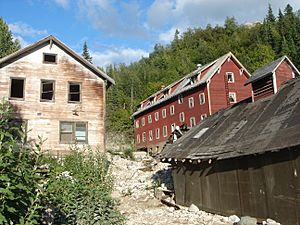 The Kennecott hospital (left) stood out as the town's only white-washed building. The vast majority of other town structures, including workers' bunkhouses (right), were painted red, the least expensive color at the time. The Kennecott hospital was also the site of the first X-ray machine in Alaska.

In 1925 a Kennecott geologist predicted that the end of the high-grade ore bodies was in sight. The highest grades of ore were largely depleted by the early 1930s. The Glacier Mine closed in 1929. The Mother Lode was next, closing at the end of July 1938. The final three, Erie, Jumbo and Bonanza, closed that September. The last train left Kennecott on November 10, 1938, leaving it a ghost town.

From 1909 until 1938, except when it closed temporarily in 1932, Kennecott mines "produced over 4.6 million tons of ore that contained 1.183 billion pounds of copper mainly from three ore bodies: Bonanza, Jumbo and Mother Lode." The Kennecott operations reported gross revenues above $200 million and a net profit greater than $100 million.

From 1939 until the mid-1950s, Kennecott was deserted except for a family of three who served as the watchmen until about 1952. In the late 1960s, an attempt was made to reprocess the tailings and to transport the ore in aircraft. The cost of doing so made the idea unprofitable. Around the same time, the company with land rights ordered the destruction of the town to rid them of liability for potential accidents. A few structures were destroyed, but the job was never finished and most of the town was left standing. Visitors and nearby residents have stripped many of the small items and artifacts. Some have since been returned and are held in various archives.

KCC sent a field party under the geologist Les Moon in 1955. They agreed with the 1938 conclusion, "no copper resource of a size and grade sufficient to interest KCC remained." The mill remains however.

Copper ore was discovered in a lode on Chief Nikolai's house at the mouth of Dan Creek in July 1899. The geological formations in the area were described and identified by a USGS geologist by the name of Oscar Rohn in 1899. This original copper find became the basis of the Nikolai Mine in 1900. Simultaneously, placer gold was discovered on the Dan and Young Creeks. The Bonanza ore body was discovered in Aug. 1900 by Warner and Smith. Almost simultaneously, another USGS geologist named Arthur Spencer, came across the ore when mapping the area with Frank Schrader. In 1901, the Dan Creek was staked by C.L. Warner and "Dan" L. Kain. Gold was found on Chititu Creek in April 1902 by Frank Kernan and Charles Koppus.

Besides placer deposits, copper is found as polymetallic replacement deposits in the fault planes, fractures and joints of the Triassic Nikolai greenstone, which consists of basaltic lava flows, and in the base of the Upper Triassic Chitistone limestone. Minerals include chalcocite, bornite and chalcopyrite, with associated malachite, azurite and cuprite. Native copper can also be found in the greestone. 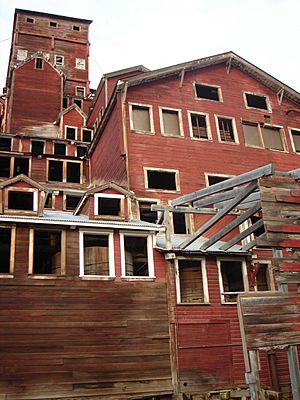 In the 1980s, Kennecott became a popular tourist destination, as people came to see the old mines and buildings. However, the town of Kennecott was never repopulated. Residents involved in the tourism industry often lived in nearby McCarthy or on private land in the surrounding area. The area was designated a National Historic Landmark in 1986 and the National Park Service acquired much of the land within the Kennecott Mill Town in 1998. The National Park Service is currently stabilizing and rehabilitating many of the mill and town buildings. Some of the structures, as well as surrounding lands, remain under private ownership. Tours of the mill town are available three times a day.

Popular tourist activities while visiting Kennecott include glacier hiking, ice climbing, and touring the abandoned mill. Visitors may also hike to the abandoned Bonanza, Jumbo and Erie mines, all of which are strenuous full-day hikes, with Erie Mine being a somewhat terrifying scramble along cliffs overlooking the Stairway Icefall. Local guide services offer all of these hikes if one would like some route-finding assistance.

Kennecott is now accessible by air (McCarthy has a 3,500 foot (1,100 m) meter gravel runway) or by driving on the Edgerton Highway to the McCarthy Road, an unimproved gravel road. The McCarthy Road ends at the Kennicott River and a footbridge is available for pedestrian traffic to McCarthy. From McCarthy, it is 4.5 miles (7.2 km) to Kennecott, and shuttles are available.

All content from Kiddle encyclopedia articles (including the article images and facts) can be freely used under Attribution-ShareAlike license, unless stated otherwise. Cite this article:
Kennecott, Alaska Facts for Kids. Kiddle Encyclopedia.