McCarthy is a census-designated place (CDP) in Valdez-Cordova Census Area, Alaska, United States. The population was 28 at the 2010 census.

McCarthy is 193 km (120 mi) northeast of Cordova at the foot of the Wrangell Mountains. According to the United States Census Bureau, the CDP of McCarthy has a total area of 148.3 square miles (384 km2). None of the area is covered with water. It is connected to the outside world via the McCarthy Road spur of the Edgerton Highway from Chitina, and must be passed through to reach Kennecott, a destination of tourists seeking access to Wrangell-St. Elias National Park and Preserve. Historically, from the end of the road one had to cross the Kennecott River and then a smaller stream using manually propelled ropeways, but a footbridge was built in the 1990s. Visitors can walk to McCarthy in about 15 minutes, although shuttle vans and busses are available during the tourist season from the bridge to both McCarthy and Kennecott.

McCarthy has a continental subarctic climate according to the (Köppen Dfc).

There were 26 households out of which 15.4% had children under the age of 18 living with them, 15.4% were married couples living together, 3.8% had a female householder with no husband present, and 73.1% were non-families. 53.8% of all households were made up of individuals and none had someone living alone who was 65 years of age or older. The average household size was 1.62 and the average family size was 2.14. 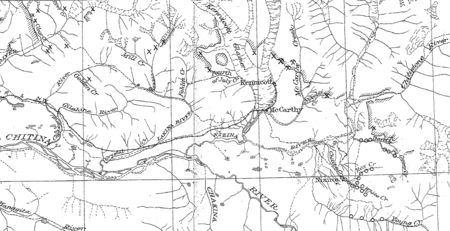 For centuries, Athabascans hunted in the area of McCarthy. Chief Nikolai and his band of Athabaskan Natives had a summer camp at Dan Creek, 15 miles east of McCarthy, where they collected copper nuggets from Dan Creek. Their permanent camp was on the Copper River at the village of Taral near Chitina where they fished for salmon.

Copper was discovered between the Kennicott Glacier and McCarthy Creek in 1900, after which Kennecott mines, Kennecott Mining Company, and company town of Kennecott were created. Due to a clerical error, the corporation and town used the spelling of Kennecott instead of Kennicott, named for Kennicott Glacier in the valley below the town. The glacier was named after Robert Kennicott, a naturalist who explored in Alaska in the mid-1800s.

The Copper River and Northwestern Railway reached McCarthy in 1911. 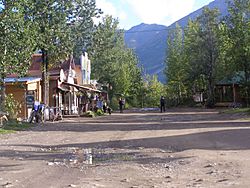 The bulk of McCarthy's main road

In 1938, the copper deposits were mostly gone and the town was mostly abandoned. The railroad discontinued service that year. Over its 30-year operation, U.S. $200 million in ore was extracted from the mine, making it the richest concentration of copper ore in the world.

The population of McCarthy and Kennecott fell to almost zero until the 1970s, when the area began to draw young people from the many who came to Alaska in the '70s for adventure and the big money of the Trans Alaska Pipeline project. In the '80s, after the area was designated Wrangell-St. Elias National Park (1980), it began to draw some adventurous tourists to the new national park. The few people that lived there began to provide a variety of tourist services. There has always been at least one family living in the McCarthy area since 1953.

The old mine buildings, artifacts, and colorful history attract visitors during the summer months. The Kennecott and McCarthy area ranks as one of the United States' most endangered landmarks by the National Trust for Historic Places. Emergency stabilization of the old buildings has been done and more will be required.

In 2014, the TV show Edge of Alaska premiered on Discovery Channel. The show has caused controversy though, as many town residents feel the town is portrayed in a bad light due to the troublesome incidents that have occurred there.

All content from Kiddle encyclopedia articles (including the article images and facts) can be freely used under Attribution-ShareAlike license, unless stated otherwise. Cite this article:
McCarthy, Alaska Facts for Kids. Kiddle Encyclopedia.