Kids Encyclopedia Facts
This page is about the settlement. For the hydroid genus, see Solanderiidae.

Chitina is located on the west bank of the Copper River at its confluence with the Chitina River on the Edgerton Highway, and junction with the McCarthy Road. It is 85 km (53 mi) southeast of Copper Center and 106 km (66 mi) southeast of Glennallen. It is outside the western boundary of the Wrangell - St Elias National Park and Preserve.

In 1945, work had begun to convert the CR&NW railroad line, from Cordova to Kennicott, into a highway, but work halted with the 1964 Good Friday Earthquake, leaving a significant gap between Chitina and the Million Dollar Bridge near Cordova. The rail route from Chitina to Kennicott is a roadway, the McCarthy Road.

There were 52 households out of which 23.1% had children under the age of 18 living with them, 42.3% were married couples living together, 13.5% had a female householder with no husband present, and 42.3% were non-families. 36.5% of all households were made up of individuals and 9.6% had someone living alone who was 65 years of age or older. The average household size was 2.37 and the average family size was 3.07. 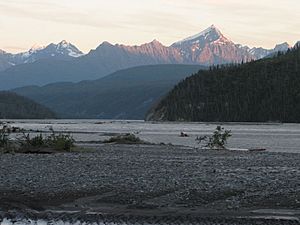 Athabascans have lived in the area around Chitina for centuries as evidenced by the archaeological sites south and east of Chitina. Before 1900, Chitina was the site of large village whose population was slowly decimated by the influx of people, disease and conflicts.

Copper ore was discovered in about 1900 along the northern edge of the Chitina River valley. This brought a rush of prospectors and homesteaders to the area.

Stephen Birch homesteaded the site in 1908. The Copper River and Northwestern Railway enabled Chitina to develop into a thriving community by 1914. It had a general store, a clothing store, a meat market, stables, a tinsmith, five hotels, several rooming houses, a pool hall, bars, restaurants, dance halls and a movie theater. The mines closed in 1938 and the remaining support activities moved to what is now the Glennallen area. Chitina became a virtual ghost town. Otto Adrian Nelson, a surveying engineer for the Kennecott Mines, eventually bought up much of the town. He built a unique hydroelectric system that supplied electric power to all his buildings. He also supplied much of the town center with hot and cold running water.

Current activity in Chitina revolves around the dipnet fishing for salmon that occurs every summer. Alaskans are allowed to dip a large number of salmon during their spawning runs and Chitina is an accessible and popular place for this activity.

In late 1977, jeweler Art Koeninger purchased the "Chitina Tin Shop” with the intention of turning it into a residence. In 1979, the site, formerly known as “Fred’s Place” and “Schaupp’s,” was placed on the National Register of Historic Places and has won two historic preservation grants. It currently houses the Spirit Mountain Artworks.

All content from Kiddle encyclopedia articles (including the article images and facts) can be freely used under Attribution-ShareAlike license, unless stated otherwise. Cite this article:
Chitina, Alaska Facts for Kids. Kiddle Encyclopedia.