Glennallen (Ciisik’e Na’ in Ahtna) is a census-designated place (CDP) in the Copper River Census Area in the Unorganized Borough of the U.S. state of Alaska. As of the 2020 census, the population of the CDP was 439, down from 483 in 2010. It is the most populated community in the census area.

It lies along the Glenn Highway at its junction with the Richardson Highway, 189 road miles (304 km) east of Anchorage. It is just outside the western boundary of Wrangell-St. Elias National Park and Preserve. 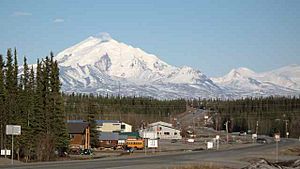 In earlier times, the Ahtna Alaska Natives roamed the Copper River Valley in search of fish and game, both of which are usually plentiful there. Ahtna now live in several communities around Glennallen. In 1899, the U.S. Army built a pack trail for summer use between the port of Valdez and Eagle, which passed through the Copper River Valley. In the early 20th century, the trail was widened and became the Richardson Highway.

During World War II, the United States built a series of military bases in Alaska, primarily for the purpose of supplying aircraft and other war material to Russia by way of Alaska and the Russian Far East as part of the Lend-lease program. This made it difficult for the Germans to the west and the Japanese to the south of Russia to interfere with the supply operation. As part of this operation, highways were built to supply the bases. The major highway project of this effort was the Alaska Highway from Dawson Creek, British Columbia, Canada to the existing Richardson Highway at Delta Junction, Alaska and thus to Fairbanks via the Richardson Highway. Another project was the Glenn Highway, which connected Anchorage, Alaska's largest city, with the Richardson Highway, and thus with the rest of Alaska, Canada, and the then-48 United States.

Construction for the Glenn Highway began at a camp on the Richardson Highway in the Copper River Valley named Glennallen after two U.S. Army explorers of the late 19th century: Capt. Edwin Glenn and Lt. Henry T. Allen. The highway was completed in 1945. Glennallen developed as a small community around the site of the camp. It became a commercial center for motor traffic along the Glenn and Richardson highways. It is one of the few communities in the region that was not built on the site of a Native village.

During the 1950s and 1960s, another highway, the Tok Cut-Off, was constructed from a point 15 miles north of Glennallen to the community of Tok, 135 miles east on the Alaska Highway. This enhanced Glennallen as a commercial center. Also, in 1956, a Jesuit school, Copper Valley School, was opened. This facility increased the population considerably by bringing to the region a number of staff and students from Holy Cross Mission in western Alaska. In 1961 "Glenallen" was officially renamed "Glennallen" by the US Postal Service, adding the extra 'n'.

Glennallen's economy grew with the construction of the Trans-Alaska Pipeline System from 1975–1977 and the continuing service needs of the pipeline. The economy of the area was negatively impacted by the construction of the George Parks Highway, which connected Anchorage to Denali National Park and Fairbanks along the Alaska Railroad route, bypassing Glennallen.

Glennallen first appeared on the 1950 U.S. Census as an unincorporated village. It was made a census-designated place (CDP) in 1980.

Many but not all year-round homes are fully plumbed. Although many residents have private wells in the Glennallen area, the water is often of poor quality. Glennallen Heights utilizes two wells to serve a piped system, and a local private business delivers water by truck to fill home water tanks. The majority of downtown is connected to a piped sewage system operated by The Glennallen Improvement Corp. The sewage system serves 52 homes and businesses, and is being expanded to the Alaska Bible College and the Glennallen Heights subdivision. Most residences have individual septic tank systems, but permafrost and high water tables cause drainage failures. Refuse collection services and the Class II permitted landfill are operated by Copper Basin Sanitation in Glennallen. Copper Valley Electric purchases power from the state-owned Solomon Gulch Hydro Facility, and owns diesel plants in Glennallen and Valdez. Electricity is provided by Copper Valley Electric Assoc.

There are two schools in the community, attended by 158 students. (Glennallen Elementary School and Glennallen High School [1]) The schools are part of the Copper River School District.

Prince William Sound Community College is located in Glennallen at mile 188 of the Glenn Highway. Alaska Bible College was founded in Glennallen in 1966, and continues to offer extension classes in the community.

Glennallen is the supply hub of the Copper River region. Local businesses serve area residents and tourism from the Glenn Highway traffic, supplies and services, schools and medical care. State highway maintenance and federal offices are in Glennallen. RV parks, lodging, fuel and other services cater to independent travelers. The National Park Service's Wrangell-St. Elias Visitor Center and the Copper River Princess Wilderness Lodge were completed in 2002 at Copper Center. Offices for the Bureau of Land Management, Alaska State Troopers, and the Dept. of Fish and Game are located here. There are several small farms in the area. Four residents hold commercial fishing permits. Glennallen is home to Ahtna, Incorporated.

The Glenn/Tok Cutoff and Richardson Highways provide year-round road access to other areas of the state. Brenwick's Airport provides public air access, and scheduled services are available. The 2,070' turf airstrip is owned and operated by Copper Basin District, Inc. The Gulkana Airport is located 4.3 miles northeast.

All content from Kiddle encyclopedia articles (including the article images and facts) can be freely used under Attribution-ShareAlike license, unless stated otherwise. Cite this article:
Glennallen, Alaska Facts for Kids. Kiddle Encyclopedia.