Eagle (Tthee T’äwdlenn in Hän Athabascan) is a city on the south bank of the Yukon River near the Canada–US border in the Southeast Fairbanks Census Area, Alaska, United States. It includes the Eagle Historic District, a U.S. National Historic Landmark. The population was 86 at the 2010 census. Every February, Eagle hosts a checkpoint for the long-distance Yukon Quest sled dog race.

Eagle is located on the southern bank of the Yukon River, 8 miles (13 km) west of the border between Alaska and the Yukon Territory of Canada at the end of the Taylor Highway.

According to the United States Census Bureau, the city has a total area of 1.0-square-mile (2.6 km2), all land.

Like most of Alaska, Eagle has a subarctic climate (Köppen Dfc) with long, cold winters occasionally moderated by chinook winds, and short, warm summers. In the absence of chinook moderation, winter temperatures can be dangerously cold: in the notoriously cold month of December 1917, the temperature did not rise above −25 °F or −31.7 °C and it averaged −46 °F or −43.3 °C. When chinooks occur, winter temperatures can get above 32 °F or 0 °C, doing so on an average of five days per winter.

For thousands of years, the Eagle area was the home to indigenous peoples, including the historic Han people since long before the arrival of Europeans in Alaska.

The first permanent structure by Europeans in present-day Eagle was a log trading post called "Belle Isle", built around 1874. In the late 1800s, Eagle became a supply and trading center for miners working the upper Yukon River and its tributaries. By 1898, its population had exceeded 1,700, as people were coming into the area because of the Klondike Gold Rush.

In 1901 Eagle became the first incorporated city in the Alaska Interior. It was named for the many eagles that nested on nearby Eagle Bluff. A United States Army camp, Fort Egbert, was built at Eagle in 1900. A telegraph line between Eagle and Valdez was completed in 1903. In 1905, Roald Amundsen arrived in Eagle and telegraphed the news of the Northwest Passage to the rest of the world.

The gold rushes in Nome and Fairbanks lured people away from Eagle. In 1903 Judge James Wickersham moved the Third Division court from Eagle to Fairbanks. By 1910, Eagle's population had declined to its present-day level (below 200 people). Fort Egbert was abandoned in 1911.

Present-day Eagle is home to mostly people of European descent. Nearby Eagle Village has a small population that is about 50 percent Han.

The town enjoyed some notoriety as the setting of John McPhee's book Coming into the Country, which was first published in 1977 and became quite popular. Many of the buildings from the Gold Rush years are preserved as part of the Eagle Historic District, a National Historic Landmark district.

Eagle first appeared on the 1900 U.S. Census as Eagle City, although it was not incorporated until the following year. It was shortened to Eagle in the following census.

Of the 58 households, 20.7% had children under the age of 18 living with them, 55.2% were married couples living together, 6.9% had a female householder with no husband present, and 36.2% were non-families. 34.5% of all households were made up of individuals, and 5.2% had someone living alone who was 65 years of age or older. The average household size was 2.22 and the average family size was 2.86. 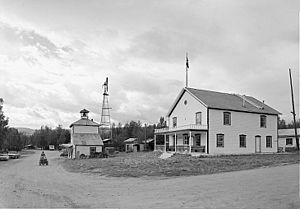 The Eagle Historic District is a well-preserved example of the historic development in Northern Alaska. Fort Egbert was built in 1889 to serve a central governmental role for the area. Over 100 buildings from this era survive including the Federal courthouse which was funded by fines enacted against the rowdy inhabitants. The district was added to the National Register of Historic Places on October 27, 1970 and was designated as a National Historic Landmark on June 2, 1978.

In the 1970s high school-aged children took correspondence courses from the University of Nebraska-Lincoln, with a local resident supervising their work. Eagle is now part of the Alaska Gateway School District. Eagle School, a K–12 campus, serves city students.

All content from Kiddle encyclopedia articles (including the article images and facts) can be freely used under Attribution-ShareAlike license, unless stated otherwise. Cite this article:
Eagle, Alaska Facts for Kids. Kiddle Encyclopedia.