Lake Louise (Sasnuu’ Bene’ in Ahtna) is a census-designated place (CDP) in Matanuska-Susitna Borough, Alaska, United States. Although it is an isolated settlement and is close to Glennallen, it is considered part of the Anchorage, Alaska Metropolitan Statistical Area like all other locations in the Mat-Su Borough. At the 2010 census the population was 46, down from 88 in 2000. The first recorded name of Lake Louise was Shosubenich, which means "great flat water with many islands". Later, Lake Louise was named Lake Adah after a girlfriend of Lieutenant Castner. Later Captain Edwin Glenn changed the name to Lake Louise in honor of his wife. The U.S. Army established a recreation facility at the lake towards the end of World War II and built the first road into the area. Lake Louise road runs about 20 miles (32 km) from the Glenn Highway to the lake. There are still several dilapidated cabins at the "Army Point" campground, including one that was used for four days by General Dwight D. Eisenhower before he was president. The lake is also home to the Lake Louise State Recreation Area.

According to the United States Census Bureau, the CDP has a total area of 74.2 square miles (192 km2), of which, 47.9 square miles (124 km2) of it is land and 26.4 square miles (68 km2) of it (35.53%) is water. There are many small islands at the south end of the lake, most of which have homes built on them. There are also several private resorts and marinas, and a state recreation area with campgrounds and a boat launch.

Lake Louise first appeared on the 2000 U.S. Census as a census-designated place (CDP). 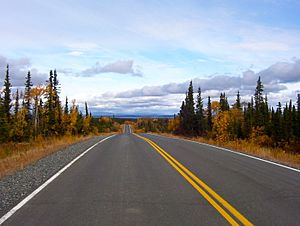 There were 41 households, out of which 17.1% had children under the age of 18 living with them, 58.5% were married couples living together, 2.4% had a female householder with no husband present, and 39.0% were non-families. 24.4% of all households were made up of individuals, and 2.4% had someone living alone who was 65 years of age or older. The average household size was 2.15 and the average family size was 2.64.

The Lake Louise State Recreation Area has a large campground, boat launch, and picnic areas, as well as a trail leading to the hilltop where the Army's original recreation area's cabins still stand, although in a state of severe disrepair. Visitors can expect to see a wide variety of wildlife, including the only know freshwater nesting site for cormorants, located on Bird Island. In the fall the Nelchina caribou herd passes through this area. The fishing in the lake is considered excellent, with a variety of freshwater fish, including lake trout and burbot. 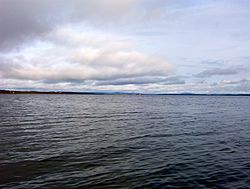 All content from Kiddle encyclopedia articles (including the article images and facts) can be freely used under Attribution-ShareAlike license, unless stated otherwise. Cite this article:
Lake Louise, Alaska Facts for Kids. Kiddle Encyclopedia.