The Wrangell Mountains are a high mountain range of eastern Alaska in the United States. Much of the range is in the Wrangell-Saint Elias National Park and Preserve. The Wrangell Mountains were made by volcanoes. The second and third tallest volcanoes in the United States, Mount Blackburn and Mount Sanford are there. The range takes its name from Mount Wrangell, which is one of the largest shield volcanoes in the world. It is also the only mountain in the range that is an active volcano. 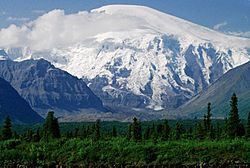 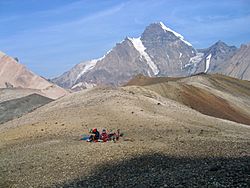 Hikers on a pass between Mt. Sanford and Mt. Drum

The Wrangell Mountains are named after an explorer who was also president of the Russian-American Company, Admiral Ferdinand von Wrangel. American folk singer John Denver wrote a song, "Wrangell Mountain Song", in reference to the range.

All content from Kiddle encyclopedia articles (including the article images and facts) can be freely used under Attribution-ShareAlike license, unless stated otherwise. Cite this article:
Wrangell Mountains Facts for Kids. Kiddle Encyclopedia.