Kids Encyclopedia Facts
For the mountain by this name in Antarctica, see Mount Blackburn (Antarctica).

Mount Blackburn is the highest peak in the Wrangell Mountains of Alaska in the United States. It is the fifth-highest peak in the United States and the twelfth-highest peak in North America. The mountain is an old, eroded shield volcano, the second-highest volcano in the U.S. behind Mount Bona and the fifth-highest in North America. It was named in 1885 by Lt. Henry T. Allen of the U.S. Army after Joseph Clay Stiles Blackburn, a U.S. senator from Kentucky. It is located in the heart of Wrangell – St. Elias National Park, the largest national park in the country.

The mountain's massif is covered almost entirely by icefields and glaciers and is the principal source of ice for the Kennicott Glacier, which flows southeast over 20 miles (32 km) to just above the town of McCarthy. The mountain also contributes a large volume of ice to the north-flowing Nabesna Glacier and the Kuskulana Glacier system.

The western of Blackburn's two summits is the mountain's highest point, a fact that was not understood until the 1960s when new USGS maps were published. The first ascent of the west peak, and hence Mount Blackburn, was done on May 30, 1958, by Bruce Gilbert, Dick Wahlstrom, Hans Gmoser, Adolf Bitterlich, and Leon Blumer via the North (also called the Northwest) Ridge. This team made the first ascent of Blackburn but did not even know it at the time due to the incorrect identification of the highest point. Blumer's article in the 1959 American Alpine Journal is titled "Mount Blackburn – Second Ascent." 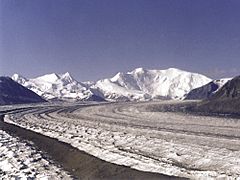 The Nabesna Glacier, with Mount Blackburn and its two summits at right; Atna Peaks is the twin summit left of center 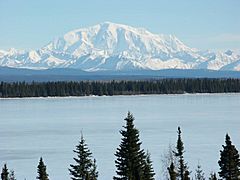 Mount Blackburn from the west, looking across Willow Lake

Kennedy Peak, or East Blackburn, 16,286 ft (4,964 m), is the eastern summit and was originally thought to be the highest point. The first ascent of this summit was made in 1912 by Dora Keen and George Handy via the Kennicott Glacier (on the south side of the mountain) and East Face. This heady exploit was ahead of its time. Dora Keen, driven by a deep desire for the climb, solicited miners from the nearby Kennecott Copper Mines, and forged a route up the heavily crevassed East Face to the East Peak, but did not traverse over to the West Peak. Keen went on to write a famous article for the Saturday Evening Post titled, "First up Mount Blackburn." In 1912, Keen and Handy thought they were on Blackburn's highest point.

Mount Blackburn represents the heavily eroded core of a shield volcano. Because it is shrouded in permanent ice, its internal structure cannot be determined. It is believed to have a summit caldera, greatly modified by glaciation. The oldest rocks in the area are granites, about 4.2 million years old, representing an intrusive mass. The majority of the mountain is 3.4 million year old granite, intruding between andesite flows. From this it is inferred that a caldera collapse took place between 4.2 and 3.4 million years ago, after which activity ceased.

Today's standard route on the peak is the 1958 ascent route, the North (or Northwest) Ridge, which is approached from the Nabesna Glacier, on the north side of the mountain, opposite from Keen and Hardy's route. The route starts from an airstrip on the glacier at an altitude of 7,200 feet (2,200 m). It is a moderate climb by Alaskan standards (Alaska Grade 2).

All content from Kiddle encyclopedia articles (including the article images and facts) can be freely used under Attribution-ShareAlike license, unless stated otherwise. Cite this article:
Mount Blackburn Facts for Kids. Kiddle Encyclopedia.