Joseph Clay Stiles Blackburn (October 1, 1838 – September 12, 1918) was a Democratic Representative and Senator from Kentucky. Blackburn, a skilled and spirited orator, was also a prominent trial lawyer known for his skill at swaying juries. 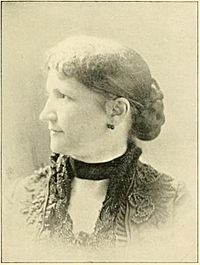 Blackburn was born on October 1, 1838 near Spring Station, Kentucky. He was the younger brother of Kentucky governor Luke P. Blackburn.

He attended Sayres Institute in Frankfort and graduated from Centre College in Danville in 1857. He studied law in Lexington and was admitted to the bar in 1858. He practiced in Chicago until 1860 when he returned to Woodford County, Kentucky and entered the Confederate Army as a private in 1861.

A staff officer, by the end of the Civil War Blackburn had attained the rank of lieutenant colonel. After the war he settled in Arkansas where he was engaged as a lawyer and a planter in Desha County until 1868 when he returned to Kentucky and opened law offices in Versailles.

He was a member of the State house of representatives from 1871 to 1875. He was then elected as a Democrat to the Forty-fourth and to the four succeeding Congresses (March 4, 1875 - March 3, 1885). He was the chairman of the Committee on the District of Columbia (Forty-fifth Congress) and the Committee on Expenditures in the Department of War (Forty-fifth and Forty-sixth Congresses).

He was appointed Governor of the Panama Canal Zone by President Theodore Roosevelt on April 1, 1907. He resigned and returned to his estate in Woodford County.

He died on September 12, 1918 in Washington, D.C.. He was interred in the State Cemetery in Frankfort.

All content from Kiddle encyclopedia articles (including the article images and facts) can be freely used under Attribution-ShareAlike license, unless stated otherwise. Cite this article:
Joseph Clay Stiles Blackburn Facts for Kids. Kiddle Encyclopedia.