Atna Peaks is an eroded stratovolcano or shield volcano in the Wrangell Mountains of eastern Alaska. It is located in Wrangell–Saint Elias National Park about 6 miles (9.7 km) east of Mount Blackburn, the second-highest volcano in the United States, and just south of the massive Nabesna Glacier. Because the mountain is almost entirely covered in glaciers, no geological studies have been done, but published references state and the geological map shows that the mountain is an old eroded volcanic edifice.

Atna Peaks was named in 1965 by the first ascent party from the Mountaineering Club of Alaska, because the "peaks are at the edge of the Copper River drainage and the old Indian name for that river was Atna." 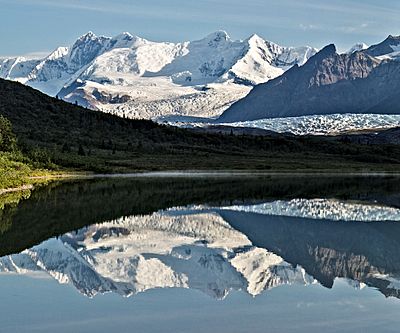 All content from Kiddle encyclopedia articles (including the article images and facts) can be freely used under Attribution-ShareAlike license, unless stated otherwise. Cite this article:
Atna Peaks Facts for Kids. Kiddle Encyclopedia.