Soldotna is located in the Southcentral portion of Alaska on the central-western portion of the Kenai Peninsula. The city limits span 7 square miles along the Kenai River, which empties into the Cook Inlet in the nearby city of Kenai. Soldotna is located on the western edge of the vast Kenai National Wildlife Refuge, a protected area spanning nearly 2 million acres and home to bears, moose, caribou, sheep, and many fish and bird species. 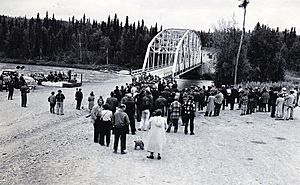 In 1947, after World War II, the United States government withdrew a number of townships along Cook Inlet and the lower Kenai River from the Kenai National Moose Range, opening up the area to settlement under the Homestead Act. Veterans of the United States armed services were given a 90-day preference over non-veterans in selecting land and filing for property. Also in that year, the Sterling Highway right-of-way was cleared of trees from Cooper Landing to Kenai. The location of present-day Soldotna was selected as the site for the highway's bridge crossing the Kenai River.

The construction of the Sterling Highway provided a link from the Soldotna area to the outside world. More homesteads were taken and visitors came to fish in the area. The Soldotna Post Office opened in 1949 and other businesses opened in the next few years.

Oil was discovered in the Swanson River region in 1957, bringing new economic development to the area. In 1960, Soldotna was incorporated as a fourth class city with a population of 332 and an area of 7.4 square miles (4,723.4 acres). Then seven years later, in 1967, Soldotna was recognized as a first class city.

The city experienced rapid population growth in the 1960s through the 1990s as a result of its location at the intersection of two major highways and due to development of the oil industry on the Kenai Peninsula. As the City and the oil industry have matured, population growth has somewhat slowed, although the city experienced more growth from 2000-2010 than during the previous decade.

Soldotna is located on the banks of the Kenai River on the Kenai Peninsula of Alaska. It is named after nearby Soldotna Creek. There are multiple theories explaining the origin of the word "Soldotna"; these include the variant "Soldatna", which was the prevalent spelling of the community's name during the 1950s and 1960s.

As with much of Southcentral Alaska, Soldotna has a moderate subarctic climate (Köppen Dfc) due to the cool summers, though the diurnal temperature variation is larger than most locations in the region. Winters are snowy, long but not particularly cold, especially considering the latitude, with January featuring a daily average temperature of 13.4 °F (−10.3 °C). There are 46 nights of sub-0 °F (−18 °C) lows annually, and the area lies in USDA Plant Hardiness Zone 4, indicating an average annual minimum in the −20 to −30 °F (−29 to −34 °C) range. Summers are cool due to the marine influence, with 12 days of 70 °F (21 °C)+ highs annually.

Soldotna first appeared on the 1960 U.S. Census as an unincorporated village. It formally incorporated in 1967.

The age distribution of the population shows 26 percent under the age of 18 and 13 percent age 65 or older. The median age was 34.6 years.

The Joyce K. Carver Memorial Library on Binkley Street was remodeled in 2013, providing media resources to the greater Soldotna community. The library offers six desktop computers and two laptops for public access and free Wi-Fi for anyone with wireless enabled devices. 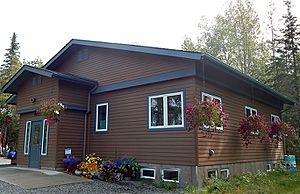 The Kenai Watershed Forum (KWF) is a non-profit organization located in the historic Ralph Soberg House inside Soldotna Creek Park. The KWF works to maintain the health of the watersheds on the Kenai Peninsula. Its programs include Stream Watch, which trains volunteers to protect the Russian and Kenai Rivers; a summer camp for 6-12 year olds; and environmental restoration projects ranging from invasive plant remediation to riverbed reconstruction to culvert reconfiguration/replacement.

The Kenai National Wildlife Refuge consists of 1.92 million acres in a variety of ecosystems including ice fields and glaciers, mountain tundra, northern boreal forests, and lakes, wetlands and rivers. The Chickaloon River Flats remains the last pristine major saltwater estuary on the Kenai Peninsula and attracts thousands of migratory waterfowl and shorebirds annually. The Refuge is also home to brown and black bears, dall sheep, moose, and caribou. The Kenai National Wildlife Refuge Visitor’s Center is located on Ski Hill Road close to the intersection of Funny River Road and the Sterling Highway. 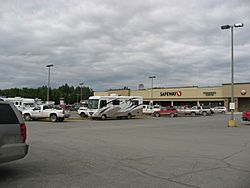 Soldotna's Safeway store, at the west end of the Peninsula Center Mall at Binkley Street and the Sterling Highway. Prior to competition from Fred Meyer, located on the other side of the Soldotna Y, this store's strategic location made it one of the busiest grocery stores in the entire state.

The Sterling Highway runs through and connects the eastern and central portions of the city. Its intersection with the start of the Kenai Spur Highway, widely known as the "Soldotna Y" due to its previous Y-shaped configuration, is a local landmark. The Kenai Spur Highway connects neighborhoods in the north-central portion of the city to other parts of Soldotna, adjoining Ridgeway and beyond to Kenai, Salamatof and Nikiski, ending along Cook Inlet at the Captain Cook State Recreation Area.

The western portions of Soldotna are connected by local roads (east of the Kenai River) and Kalifornsky Beach Road (west of the river). "K-Beach" Road, as it is often known, is a loop to the west of the Sterling Highway. At its northern end, it straddles the southernmost portions of city limits (including Kenai Peninsula College and the Soldotna Sports Center) and adjoining Kalifornsky. Continuing past city limits, K-Beach provides an alternate access to Kenai along the south side of the Kenai River via the Warren Ames Memorial Bridge, the last road crossing downriver, then continues west and south, returning to the Sterling Highway at Kasilof. Funny River Road continues eastbound from the northern terminus of K-Beach Road, connecting the Sterling Highway with Soldotna Airport (see below), Kenai National Wildlife Refuge headquarters and Funny River.

Almost all of the city's commercial districts are arrayed along these roads. Interior arterial and collector streets, such as Binkley and Kobuk streets and Marydale and Redoubt avenues, primarily provide access either to residential areas or to community facilities such as the borough building, the post office, Central Peninsula Hospital and Soldotna High School

Soldotna Airport (FAA LID and IATA: SXQ, ICAO: PASX) is a city-owned, public use airport located in the southeastern corner of city limits, across the Kenai River from the city center. Primary access to the airport is from Funny River Road, a short distance east of its intersection with the Sterling Highway.

Two plane crashes associated with operations at the airport, one on February 4, 1985 involving a commuter flight from Anchorage and one on July 7, 2013 involving an air taxi flight, resulted in the deaths of all on-board (nine and ten fatalities, respectively).

Public transit is offered through CARTS (Central Area Rural Transit System), an on-demand shuttle system serving the communities of Kenai, Soldotna, Funny River, Kasilof, Nikiski, and Sterling. CARTS does not operate like a conventional "city bus". there are no fixed routes, bus stops, or flagstops. Riders must arrange pickup by phone the day before. 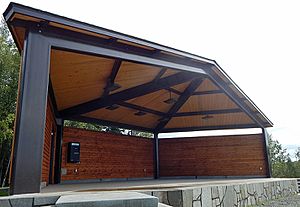 The City of Soldotna operates eleven recreational parks and a memorial park:

Tsalteshi Trails (http://www.tsalteshi.org) are located just south of Soldotna with two trailheads; behind Skyview Middle School and across from the Soldotna Sports Center on Kalifornsky Beach Road. The trail system contains over 25 kilometers (15 miles) of trails groomed for cross country skiing in the winter and open for hikers, runners, mountain bikers and leashed dogs when there is no snow.

The Soldotna Regional Sports Complex is home to the Kenai River Brown Bears, a Junior A hockey team who play in the West Division of the North American Hockey League.

Les Anderson, at the time the owner of Soldotna's Ford dealership, holds the record for the largest king salmon, caught here on May 17, 1985 and weighing in at 97 lb 4 oz. The record-setting fish is on display at the Soldotna Visitor Center.

Many smaller healthcare providers and healthcare-related businesses have located in Soldotna to take advantage of proximity to the Central Peninsula hospital.

Tourism on the Kenai Peninsula revolves heavily around outdoor activities, including fishing, hunting, hiking, camping, and canoeing/rafting. Soldotna provides several city-owned, public access parks along the Kenai River. The river contains all five Pacific salmon species, as well as other salmonids such as Dolly Varden and rainbow trout. Soldotna is also in close proximity to the Kenai National Wildlife Refuge, Tsalteshi Trails, and various waterways (the Kenai and Kasilof Rivers, Soldotna and Slikok Creeks, and Skilak and Tustumena Lakes). The Kenai River was selected by CNN Travel as one of the "World's 15 Best Rivers for Travelers," due to its fishing and hunting opportunities. 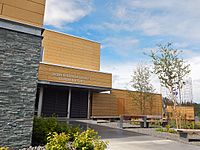 Soldotna is home to the Kenai Peninsula College’s (KPC) Kenai River Campus, a division of the University of Alaska Anchorage. The campus sits among 300 wooded acres on Soldotna's west side and includes a library, laboratories, computer labs, a residence hall, and an art gallery. The Kenai River Campus enrolls approximately 2,500 students a semester and offers associate's and bachelor's degrees, certificate programs, and occupational endorsement certificates.

The Amundsen Educational Center is a non-profit educational and vocational training school located on the eastern edge of the city. The AEC offers courses in building construction, office occupations, and medical coding.

Skyview Middle School serves all students in grades 7–8, as well as students from Sterling Elementary and Tustumena Elementary outside the city's boundaries. Students attend Soldotna High School for grades 9–12.

There are also a number of private schools.

All content from Kiddle encyclopedia articles (including the article images and facts) can be freely used under Attribution-ShareAlike license, unless stated otherwise. Cite this article:
Soldotna, Alaska Facts for Kids. Kiddle Encyclopedia.