Palmer is the borough seat of the Matanuska-Susitna Borough in the U.S. state of Alaska. It is part of the Anchorage Metropolitan Statistical Area. As of the 2010 census, the population of the city is 5,937.

The first people to live in the Matanuska Valley, where Palmer is located, were the Dena'ina and Ahtna Athabaskans. They moved throughout the area, living a subsistence lifestyle and trading with other native groups. Their trade routes were along the Matanuska River. Russians came to Alaska in 1741 and brought the Russian Orthodox religious tradition to the indigenous peoples of the region. In the early 1890s, an entrepreneur named George W. Palmer built a trading post on the Matanuska River, near present-day Palmer. The town was later named after Palmer.

In the late 19th century, the U.S. government began to take interest in the Matanuska coal fields located north of Palmer. This interest sparked financiers to consider constructing the Alaska Central Railroad in 1904. The advent of World War I created a need for high quality coal to fuel U.S. battleships, and by 1917 the US Navy had constructed rail from the port of Seward to the Chickaloon coal deposits. At the end of World War I, the U.S. Navy distributed land in the coal fields to war veterans and additional land was opened to homesteading. Farmers, miners and homesteaders began to populate the area. The Palmer Post Office was opened July 6, 1917 under the name of Warton. With railroad accessibility, new markets for agriculture began to open up for farmers in the Matanuska Valley.

In one year, Palmer transformed from a mere whistle stop rail siding to a planned community with modern utilities and community services. Eleven million dollars from Federal Emergency Relief Administration was spent to create the town of Palmer and relocate 203 families from the hard hit Iron Range region of Michigan, Minnesota and Wisconsin. Families traveled by train and ship to Palmer, arriving in May 1935. Upon their arrival they were housed in a tent city during their first Alaskan summer. Each family drew lots for 40-acre (160,000 m2) tracts and their farming adventure began in earnest. The failure rate was high, but many of their descendants still live in the area and there are still many operating farms in the Palmer area, including the Vanderwheele and Wolverine farms. In 1971, the National Outdoor Leadership School started operating wilderness education courses in the nearby Talkeetna and Chugach mountain ranges from a local historic farmhouse, the Berry House, which is currently listed on the National Register of Historic Places.

In addition to an agrarian heritage, the colony families brought with them Midwest America's small-town values, institutional structures, and a well-planned city center reminiscent of their old hometowns in Minnesota. Many of the structures built are now in a nationally recognized historic district. Construction of the statewide road system and the rapid development of Anchorage has fueled growth around Palmer. Many Palmer residents commute 45 minutes to work in Anchorage.

There is an honorary consulate of the Republic of Latvia at Palmer. 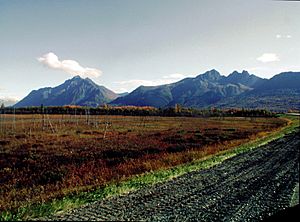 The view traveling toward Anchorage from Palmer. Pioneer Peak is to the left with Twin Peaks to the right of Pioneer. The "Ghost Forest" of the Palmer Hay Flats State Game Refuge is shown in the foreground. These trees died from the subsidence that occurred in the area as a result of the Great Alaska earthquake of 1964.

Palmer is 42 miles (68 km) northeast of Anchorage on the Glenn Highway. It lies on the north shore of the Matanuska River, not far above tidewater, in a wide valley between the Talkeetna Mountains to the north and the Chugach Mountains to the south and east. Pioneer Peak rises over 6,000 feet (1,800 m) above the town, just a few miles south. East of Palmer is Lazy Mountain, and standing behind that is Matanuska Peak. Lazy Mountain, Matanuska Peak, and Pioneer Peak are all a part of the Chugach Range. North of Palmer are the Talkeetna Mountains. Hatcher Pass, a local favorite for hiking, is located in this mountain range about 22 mi (35 km) from Palmer.

According to the United States Census Bureau, the city has a total area of 3.8 square miles (9.8 km2), all of it land. Palmer and Wasilla are the two major old-town cores of the Matanuska-Susitna Valley. Population of the area has grown dramatically in the past decade; Borough officials estimate the local population at 8,000.

Palmer has a climate similar to that of Anchorage, although with low temperatures that are on average 1.4 °F (0.8 °C) cooler and highs 0.8 °F (0.4 °C) warmer. August is the wettest month both by total precipitation and number of days with precipitation, and likewise, April is the driest. On average, over the course of a year, there are 28–29 days of sub-0 °F (−18 °C) lows, 22–23 days of 70 °F (21 °C)+ highs, and 0.8 days of 80 °F (27 °C)+ highs. The town straddles the border between USDA Plant Hardiness Zones 4b and 5a, indicating the coldest temperature of the year is typically around −20 °F (−29 °C). Palmer is flanked by two glaciers, the Matanuska Glacier and the Knik Glacier. Wind blows off of these glaciers and funnels into the town with terrible consistency. If there is a substantial snowfall, it will often sit for several days before most of it is blown away.

There were 1,472 households out of which 47.4% had children under the age of 18 living with them, 50.3% were married couples living together, 16.6% had a female householder with no husband present, and 28.1% were non-families. 23.0% of all households were made up of individuals and 7.5% had someone living alone who was 65 years of age or older. The average household size was 2.81 and the average family size was 3.29. 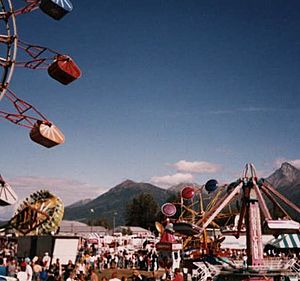 The carnival midway of the Alaska State Fair.

Palmer is most noted in Alaska as the location of the annual Alaska State Fair, where Palmer's agricultural spirit lives on. The Alaska State Fair holds contests for largest vegetable in several categories, and many national and even world records have been recorded at the fair, with the cabbage, radish, spinach and lettuce categories usually dominating local interest. In 2008, Scott Robb of Palmer won 1st place and a $2,000 prize for his 79.1 lb (35.9 kg) cabbage.

Palmer Museum of History and Art

Palmer hosts a log cabin Visitor Information Center in the heart of downtown that entertains more than 35,000 visitors each year. Each summer, the visitor center employs a full-time gardener to maintain the 2 acres (8,100 m2) of public gardens that showcase more than 600 locally grown plant varieties. The Palmer Museum of History and Art is located in the Visitor Information Center and offers visitors a chance to view artifacts from Palmer's history, provides maps to historical places to see and stocks guidebooks for more information on local attractions.

The Church of a Thousand Trees

A couple of blocks away from the Visitor Information Center is the United Protestant Church (aka The Church of a Thousand Trees), a Presbyterian church. It was built in 1936-37 and is one of the 17 structures that contribute to the National Register's Matanuska Colony Historic District.

Twelve miles north of Palmer is Hatcher Pass, a scenic mountainous pass that's been established as a state park and is home of the Independence Mine. It serves as a local back-country area for skiers, snowboarders, snowmachiners, and hikers as well as a tourist attraction in the summer months.

Palmer is home to world record vegetable harvests. The Mat-Su Valley, and Palmer in particular, are known as the farming center for the state of Alaska. Growing conditions here are ideal. Vegetables adapted to cool temperatures thrive, the glacial soils provide organic matter to keep nutrients in the root zone, many insect pests, diseases, and weeds that are common in the lower 48 are not common in Alaska, and there is plenty of sunlight in the summer to help plants grow. In June, Palmer gets 19 hours of daylight every day, so crops can keep growing until midnight. The sunlight also makes crops sweeter. Carrots spend 75 percent of their time making sugar, and 25 percent turning that sugar into starch. Species in the Brassica family grow very well in Palmer; this includes plants like cabbage, broccoli, cauliflower, brussel sprouts, kale, collards, various mustards, radishes, rutabagas, and turnips. Potatoes, beets, carrots, spinach, and lettuce also grow very well here. The Vanderweele farm is the biggest commercial vegetable farm in Palmer.

Palmer holds the world records for kale, kohlrabi, rutabaga, romanesco broccoli, turnip, and the green and purple cabbage. The record for the cabbage was set in 2012 at the Alaska State Fair with a weight of 138.25 pounds. The State Fair is the best place to see the giant vegetables. The primary reason they are able to grow so large is because of the near constant sunlight during the summer months.

On October 28, 1980, Palmer and Saroma agreed to a bilateral sister relation to promote cultural exchange and support a home-stay program for their residents.

The sister city relationship is managed by the Palmer Saroma Kai (パーマ・サロマ会).

All content from Kiddle encyclopedia articles (including the article images and facts) can be freely used under Attribution-ShareAlike license, unless stated otherwise. Cite this article:
Palmer, Alaska Facts for Kids. Kiddle Encyclopedia.