Kids Encyclopedia Facts
Not to be confused with Tanaina, Alaska.

Tanana /ˈtænənɑː/ (Hohudodetlaatl Denh in Koyukon) is a city in the Yukon-Koyukuk Census Area in the U.S. state of Alaska. At the 2000 census the population was 308. It was formerly known as Clachotin, adopted by Canadian French.

Jules Jetté (1864–1927), a Jesuit missionary who worked in the area and documented the language, recorded the Koyukon Athabascan name for the village as Hohudodetlaatl Denh, literally, ‘where the area has been chopped’. Several residents are chronicled in the 2012 Discovery Channel TV series Yukon Men. Almost 80% of the town's population are Native Americans, traditionally Koyukon (Denaakk'e) speakers of the large Athabaskan (Dené) language family. 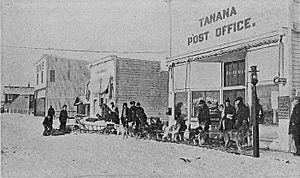 Prior to arrival of non-indigenous explorers and traders in early 1860, the point of land at the confluence of the Tanana and Yukon Rivers (Nuchalawoyyet, spelled differently in historic accounts) was a traditional meeting and trading place used by members of several indigenous groups. There were as many as five different Athabascan languages spoken in the area in 1868 when the French-Canadian François Xavier Mercier established the first (fur) trading post in the area. Noukelakayet Station, later known as Fort Adams, was located about 15 miles downstream from the mouth of the Tanana River on the north bank of the Yukon.

Subsequently, an Anglican mission and several other trading posts were established nearby. In 1898 the U.S. Army, under the leadership of Capt. P.H. Ray, founded Ft. Gibbon at the present location of Tanana. Ft. Gibbon's purpose was to oversee shipping and trading, maintain civil order, and install and take care of telegraph lines connecting to Nome and to Tanana Crossing, on the way to Valdez. All other Euro-American activities in the area near the Tanana-Yukon confluence moved upriver to accommodate Ft. Gibbon and the increased steamboat traffic caused by gold seekers. St. James Church moved to the present site of Tanana to serve the Euro-American population, and the Mission of Our Savior was constructed at the bottom of a hill opposite the confluence. The mission site became a center of activity for indigenous people in the area. Ft. Gibbon closed in 1923, but the town and mission remained.

In the 1930s a regional hospital was built in Tanana, and the Native Village of Tanana was officially chartered by the U.S. Bureau of Indian Affairs. The hospital served people throughout most of the rural northern regions of Alaska until 1982. During World War II Tanana's airfield was one of the stops for aircraft en route to Russia as part of the Lend-Lease program. Postwar, a White Alice communications site was built on a hill nine miles behind Tanana, as a part of the Cold War Era's Distant Early Warning system (DEW-Line). Also during the 1950s the mission closed and the indigenous families still living at the mission site moved down to the main town.

There were 121 households out of which 41.3% had children under the age of 18 living with them, 26.4% were married couples living together, 20.7% had a female householder with no husband present, and 43.0% were non-families. 37.2% of all households were made up of individuals and 10.7% had someone living alone who was 65 years of age or older. The average household size was 2.55 and the average family size was 3.43.

Tanana is served by the Ralph M. Calhoun Memorial Airport located at the Western edge of the city, 1 mile from the city center. Boat transport on the river is possible in summer. Tanana is served by a one-lane dirt road, which connects Tanana to the Elliott Highway in Manley Hot Springs. The road ends about 6 miles upstream from the town, but an ice road is constructed when the river freezes. The town can also be reached by boat when the weather is warm. The road opened in August 2016.

All content from Kiddle encyclopedia articles (including the article images and facts) can be freely used under Attribution-ShareAlike license, unless stated otherwise. Cite this article:
Tanana, Alaska Facts for Kids. Kiddle Encyclopedia.