Manley Hot Springs (Too Naaleł Denh in Koyukon) is a census-designated place (CDP) in Yukon-Koyukuk Census Area, Alaska, United States. At the 2010 census the population was 89.

Manley Hot Springs is located about 8 km (5.0 mi) north of the Tanana River on Hot Springs Slough, at the end of the Elliott Highway, 260 km (160 mi) west of Fairbanks.

According to the United States Census Bureau, the CDP has a total area of 54.3 square miles (141 km2), all of it land.

There were 36 households out of which 19.4% had children under the age of 18 living with them, 47.2% were married couples living together, 5.6% had a female householder with no husband present, and 47.2% were non-families. 38.9% of all households were made up of individuals and 2.8% had someone living alone who was 65 years of age or older. The average household size was 2.00 and the average family size was 2.58. 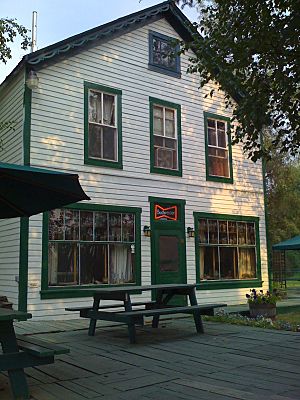 In 1902 a prospector, John Karshner, discovered several hot springs in the area. He began a homestead and vegetable farm. In the same year, the United States Army built a telegraph station. The area became a service and supply point for miners in the Tofty and Eureka mining districts. It was known as Baker's Hot Springs, after nearby Baker Creek.

Farming and livestock operations in the area produced fresh meat, poultry, and produce for sale. In 1903, Sam's Rooms and Meals, now called the Manley Roadhouse, opened. The Manley Roadhouse was owned by Robert E. Lee, who was also the town's postmaster until his death in 2010. In 1907 a miner named Frank Manley built the Hot Springs Resort Hotel. The resort was a four-story building with 45 guest rooms, steam heat, electric lights, hot baths, a bar, a restaurant, a billiard room, a bowling alley, a barber shop, and an Olympic-size indoor swimming pool which used heated water from the hot springs. During the summer, the hotel's private boat transported guests from steamers on the Tanana River. In the winter, an overland stagecoach trip from Fairbanks took two days. The town was renamed Hot Springs.

The resort and the mining in the area caused the town to prosper. It had a store, a newspaper, a bakery, clothing stores and other businesses. The population of the area in 1910 was more than 500. In 1913 the resort burned to the ground. Mining activity was also in decline and by 1920 only 29 residents lived in Hot Springs.

The town's name was changed to Manley Hot Springs in 1957.

In May 1984, a newcomer to the town, Michael Silka, killed nine people in the area.

The Elliott Highway (Alaska Route 2), completed in 1959, gives Manley Hot Springs road access from Fairbanks year-round. Before 1982 it was not plowed by the state and closed during the winter.

All content from Kiddle encyclopedia articles (including the article images and facts) can be freely used under Attribution-ShareAlike license, unless stated otherwise. Cite this article:
Manley Hot Springs, Alaska Facts for Kids. Kiddle Encyclopedia.