The area was previously a part of the Unorganized Borough, with the Upper Railbelt School District serving as the region's rural education attendance area (which was replaced by a school district under the borough's umbrella upon incorporation).

The earliest inhabitants were nomadic native Alaskans. A mining camp was established near Healy prior to 1902, and construction of the Alaska Railroad brought additional settlers to the area in the early 1920s. Clear Space Force Station, the Usibelli Coal Mine and tourism at the Denali National Park and Preserve have brought growth and development.

The borough contains North America's highest point: Denali (formerly Mount McKinley), from which it derives its name, at 6190.5 m (20,310 ft). 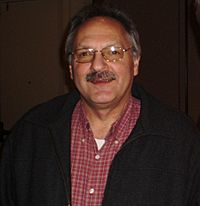 Dave Talerico represents the Denali Borough and surrounding regions in the Alaska House of Representatives. Talerico took office in 2015, becoming the first Denali Borough resident to serve in the Alaska Legislature since 1993. Prior to that, he was the borough's longest-serving mayor, from 2002 until resigning in 2012 to take a staff position in the legislature.

In the Twilight Saga by Stephenie Meyer, the Denali vampire coven (consisting of Tanya, Kate, Irina, Eleazar and Carmen and later Garrett) lives in Denali because of the lack of sunlight.

All content from Kiddle encyclopedia articles (including the article images and facts) can be freely used under Attribution-ShareAlike license, unless stated otherwise. Cite this article:
Denali Borough, Alaska Facts for Kids. Kiddle Encyclopedia.