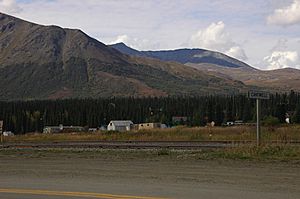 Town of Cantwell, Alaska. Tracks for the Alaska Railroad run through the foreground.

Cantwell (Yidateni Na’ in Ahtna Athabascan) was a railway flag stop at the junction with the Denali Highway. The original town is off the Parks Highway. It is a census-designated place (CDP) in Denali Borough, Alaska, United States. As of the 2010 census, the population of the CDP was 219.

Cantwell is the western terminus of the Denali Highway.

Cantwell is named after Lieutenant J. C. Cantwell, military explorer and commander of the revenue steamer Corwin on the Yukon River, 1898-1900. Prior to the settlement, the only inhabitants of the Cantwell area were nomadic Tanana Indians and Athabascan Native Alaskans who hunted and fished. In their language they named Cantwell Yede'teni'na. The town began as a flag stop on the Alaska Railroad. This flagstop supplied the Valdez Creek mining area, which had the name "Denali" for the Valdez Creek community. Many Indians from the village of Tyone came to work at Valdez Creek and later lived out their lives in the Cantwell area. Many Tyones are buried in the old Cantwell graveyard, next to the railroad tracks. Oley Nicklie, a Native Alaskan, sought work with the railroad after fur prices dropped. He and his two brothers then founded part of the settlement. Cantwell is 20 miles away from a giant abandoned igloo shaped hotel, which is not made out of ice.

Cantwell served as a partial filming location for the Lure of the Yukon during the 1920s, and for the 2007 movie Into the Wild.

There are 102 households out of which 25.5% have children under the age of 18 living with them, 44.1% are married couples living together, 8.8% have a female householder with no husband present, and 41.2% are non-families. 33.3% of all households are made up of individuals and 2.9% have someone living alone who is 65 years of age or older. The average household size is 2.18 and the average family size is 2.80.

All content from Kiddle encyclopedia articles (including the article images and facts) can be freely used under Attribution-ShareAlike license, unless stated otherwise. Cite this article:
Cantwell, Alaska Facts for Kids. Kiddle Encyclopedia.