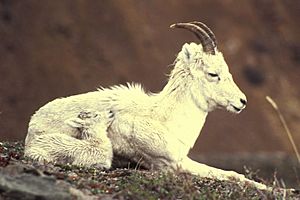 The Arctic National Wildlife Refuge (abbreviated ANWR) is in northeastern Alaska. It was created to protect and keep the area's Wildlife and wilderness. Some of these are polar bears, grizzly bears, grey wolves, and caribou. Fish species include Dolly Varden, Arctic char, Lake trout and several kinds of salmon. There are at least 194 species of birds that visit or live here. The refuge totals 19,286,722 acres.

In the ground under ANWR is one of the last major oil reserves in the United States. There are debates on whether or not to allow oil drilling. Those in favor have argued that removing the oil will make the U.S. less dependent on foreign supplies of oil. In the 1990s, the U.S. imported over half of the oil it used. ANWR is also near the Prudhoe Bay Oil Field. It contains large oil deposits that are already providing oil. But, the refuge land is a fragile natural environment. The area proposed for oil drilling is also the calving grounds for the Porcupine caribou herds.

All content from Kiddle encyclopedia articles (including the article images and facts) can be freely used under Attribution-ShareAlike license, unless stated otherwise. Cite this article:
Arctic National Wildlife Refuge Facts for Kids. Kiddle Encyclopedia.