Prudhoe Bay Oil Field is a large oil field on Alaska's North Slope. It is the largest oil field in both the United States and in North America, covering 213,543 acres (86,418 ha) and originally containing approximately 25 billion barrels (4.0×109 m3) of oil. The amount of recoverable oil in the field is more than double that of the next largest field in the United States, the East Texas oil field. The field is operated by BP; partners are ExxonMobil and ConocoPhillips Alaska.

A map of northern Alaska; the dotted line shows the southern boundary of the North Slope. The National Petroleum Reserve -Alaska is to the West, the Arctic National Wildlife Refuge to the east, and Prudhoe Bay is between them. Red lines are pipelines. 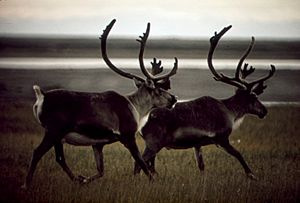 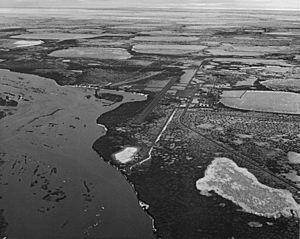 Commercial oil exploration started in Prudhoe Bay area in the 1960s and the field was discovered on March 12, 1968, by Humble Oil (which later became part of Exxon) and Atlantic Richfield Company (ARCO), with the well Prudhoe Bay State #1. ARCO was the operating partner. Drilling sites for the discovery and confirmation wells were staked by geologist Marvin Mangus. BP was among the companies that had been active in the region, and BP was able to establish itself as a major player in the western part of the Prudhoe field. The field was initially operated as two separate developments, the BP Western Operating Area and the ARCO Eastern Operating Area. Upon acquisition of ARCO by BP and sale of ARCO Alaska assets to Phillips Petroleum in 2000, the two operating areas were consolidated and BP became the sole operator of the field. In 1974 the State of Alaska's Division of Geological & Geophysical Surveys estimated that the field held 10 billion barrels (1.6×109 m3) of oil and 26 trillion cubic feet (740×10^9 m3) of natural gas. Production did not begin until June 20, 1977 when the Alaska Pipeline was completed.

The field was initially operated as two separate developments, the BP Western Operating Area (WOA: Oil Rim) and the ARCO Eastern Operating Area (EOA: Gas Cap). Upon acquisition of ARCO by BP and sale of ARCO Alaska assets to Phillips Petroleum in 2000, the two operating areas were consolidated and BP became the sole operator of the field.

In the field, oil is moved through pipelines from about 1000 wells to a pumping station at the head of the Trans-Alaska Pipeline; "flow lines" carry oil from the wells to local processing centers, then through "transit lines" to the pumping station. According to a 2007 recording of BP representative, to replace the "huge volume of material" BP removes from beneath the ground, sea water is injected that is collected from Prudhoe Bay, Alaska.

As of August 2006, BP estimated that 2 billion barrels (320×10^6 m3) of recoverable oil remain and can be recovered with current technology. 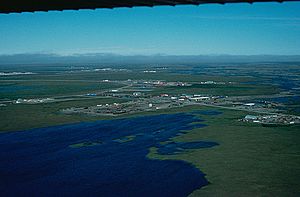 The source rock for the Prudhoe Bay Oil Field and neighboring reserves is a potential source for tight oil and shale gas. As of 2013 mineral rights to 500,000 acres overlying the North Slope oil shale had been leased by Great Bear Petroleum whose principal is the petroleum geologist Ed Duncan. 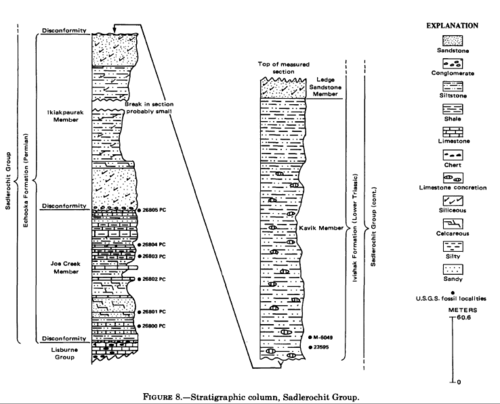 The field is an anticline structure located on the Barrow Arch, with faulting on the north side of the arch and a Lower Cretaceous unconformity on the east.

Claims on petroleum seeps in the Cape Simpson area were first made in 1915 by a group consisting of T.L. Richardson, W.B. Van Valen, O. Hansen, B. Panigeo and Egowa after these last two, Eskimos, pointed out two large mounds fifty feet high and 200 feet in diameter. Gold prospectors Smith and Berry also discovered these seeps and formed an investment group in San Francisco led by R.D. Adams, who funded an investigation led by the geologist H.A. Campbell. His report noted disputing claims by Standard Oil Company. This led to the establishment of the Naval Petroleum Reserve No. 4 in 1923, after which the Navy engaged the United States Geological Survey to survey the area from 1923 until 1926, who concluded the best objectives were Cretaceous rocks. From 1943 until 1953, the Navy drilled eighty wells, including the area at Cape Simpson and Umiat but none flowed more than 250 barrels per day.

The discovery of the Swanson River Oil Field on the Kenai Peninsula in 1957 by the Richfield Oil Corporation prompted the company to send geologists to the Arctic starting in 1959 and seismic survey crews in 1963, which recorded a reconnaissance line across what was identified as the Prudhoe structure in 1964. In 1965, during the state lease sale, Richfield partnered with Humble Oil and acquired leases over what was later identified as the gas cap while British Petroleum was awarded leases over the "oil ring".

Prudhoe Bay State No. 1 encountered the Permian-Triassic Sadlerochit formation at 8200 feet which flowed gas at 1.25 million cubic feet per day with 20-27 per cent porosity and "tens of millidarcies" permeability. Oil, condensate and gas are produced from the Triassic, Ivishak sandstone. This reservoir was deposited as a complex amalgamation of fan deltas and alluvial fans. The continuity of this fan delta was shown to extend seven miles away when the ARCO-Humble Sag River State No. 1 well was drilled. During the field’s early life the oil-bearing sandstone in some locations was 600 feet (180 m) thick. Today, the oil bearing zone's average thickness is about 60 feet (18 m) and the initial estimate of Oil in place was 2.3 billion barrels.

The original target of the Prudhoe Bay State No. 1 was the Mississippian Lisburne limestone, encountered at 8,800 feet and flowed 1,152 barrels of oil per day in the 9,505 to 9,825 foot interval along with 1.3 million cubic feet of gas. This initial oil was burned "because there wasn't ample storage", the flames of which were spotted by a passing airline. The Department of Energy in 1991 estimated oil in place for this formation at 3.1 billion barrels.

On March 2, 2006, a worker for BP Exploration (Alaska) discovered an oil spill in western Prudhoe Bay. Up to 6,400 barrels (1,020 m3) were spilled, making it the largest oil spill on Alaska's north slope to date. The spill was attributed to a pipeline rupture.

In October 2007, BP was found guilty to a misdemeanor violation of the Clean Water Act to resolve criminal liability relating to pipeline leaks of crude oil. As a result of the guilty plea, BP Alaska agreed to pay $20 million which included the criminal fine, community service payments and criminal restitution.

The March 2006 oil spill led the United States Department of Transportation to mandate that the transit lines be inspected for corrosion. As a result, BP announced on 6 August 2006 they had discovered severe corrosion, with losses of 70 to 81 percent in the 3/8-inch thickness of the pipe walls. Oil leaking was reported in one area, with the equivalent of four to five barrels of oil spilled. The damage required replacement of 16 of 22 miles (35 km) of pipeline at the Prudhoe Bay. BP said it was surprised to find such severe corrosion and that it had been 14 years since they had used a pipeline inspection gauge ("pig") to clean out its lines because the company believed the use of the pigging equipment might damage pipe integrity. BP Exploration announced that they were shutting down the oil field indefinitely, due to the severe corrosion and a minor leak in the oil transit lines. This led to an 8% reduction in the amount of oil produced by the United States, as Prudhoe Bay was the country's largest oil producer, producing over 400,000 barrels per day (64,000 m3/d).

BP initially estimated up to 2 to 3 months before the pipelines would be fully operational. This caused increases in world oil prices, and BP revised the estimated operational date to January 2007. London brent crude hit an intra-day high of $77.73/barrel, the all-time high, at that time, being $78.18/barrel. United States crude oil peaked at $76.67/barrel. The state of Alaska, which gets most of its revenue from taxing the oil industry, lost as much as $6.4 million each day until production restarted.

No part of the Alaska Pipeline was affected, although Alyeska said that lower crude oil volumes could slow pumping during the BP shutdown.

The field has since reopened. In mid-June 2007, however, a small leak occurred in one of the pipelines that connect the field to the Trans-Alaska Pipeline, shutting down the field for a week.

In March 2009 the State of Alaska sued BP in matter number 3AN-09-06181-CI alleging that BP was negligent in its management of rigging operations and corrosion control in the transit lines leading from the field into pumping station one of the Trans Alaska Pipeline. The state is seeking damages for lost royalty and tax revenues. The case seems to have been dismissed in 2010.

All content from Kiddle encyclopedia articles (including the article images and facts) can be freely used under Attribution-ShareAlike license, unless stated otherwise. Cite this article:
Prudhoe Bay Oil Field Facts for Kids. Kiddle Encyclopedia.