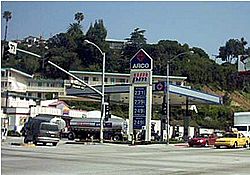 ARCO (short for Atlantic Richfield Company, the original name) is a United States oil company. It has operationsn 2 in the United States, Indonesia, the North Sea, and the South China Sea. As of July 2011, it had more than 1,300 gas stations in the western part of the United States.

The two companies merged in 1966, and bought Sinclair Oil Corporation in 1969. In 1978, ARCO opened its first ampm convenience store.

Between 1970 and 2000, ARCO had a complicated corporate history. By 1985, it sold its Eastern US business to a new Atlantic Petroleum. In 2000, the remaining Western US business was bought by British Petroleum (BP). Finally, in 2013, BP sold ARCO and the Carson Refinery to Tesoro for $2.5 billion.

In 1957, Richfield was the first to drill for oil in Alaska. On July 15 of that year they struck oil with their first well. It was the first major oil discovery in Alaska and tested at 900 barrels a day. In 1968 they partnered with Exxon for Alaska North Slope oil production. In 1980, they were the seventh largest oil company in the United States.

All content from Kiddle encyclopedia articles (including the article images and facts) can be freely used under Attribution-ShareAlike license, unless stated otherwise. Cite this article:
ARCO Facts for Kids. Kiddle Encyclopedia.