A map of northern Alaska; the dotted line shows the southern boundary of the North Slope. The National Petroleum Reserve -Alaska is to the West, the Arctic National Wildlife Refuge to the east, and Prudhoe Bay is between them.

The Alaska North Slope is the region of the U.S. state of Alaska located on the northern slope of the Brooks Range along the coast of two marginal seas of the Arctic Ocean, the Chukchi Sea being on the western side of Point Barrow, and the Beaufort Sea on the eastern. 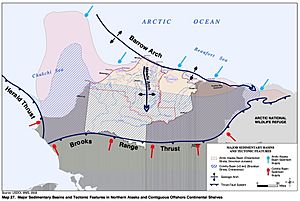 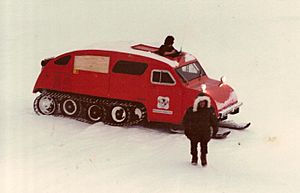 The region contains the National Petroleum Reserve–Alaska, with the bulk of Alaska's known petroleum until the Prudhoe Bay Oil Field was discovered in 1968, followed by the Kuparuk River oil field in 1969. The region also includes the Arctic National Wildlife Refuge, which itself has been the subject of controversy surrounding the possibility of petroleum drilling within its boundaries. The petroleum extracted from the region is transferred south by means of the Trans-Alaska Pipeline System to Valdez on the Pacific Ocean. Under the North Slope is an ancient seabed – the source of the oil. Within the North Slope, there is geological feature called the Barrow Arch – a belt of the kind of rock known to be able to serve as a trap for oil. It runs from the city of Barrow to a point just west of the Arctic National Wildlife Refuge. The Arctic Alaska Petroleum Province, encompassing all the lands and adjacent Continental Shelf areas north of the Brooks Range-Herald arch (see map) were estimated by the USGS in 2005 to hold more than 50 billion bbl of oil and natural-gas liquids and 227 trillion cubic feet of gas.

The source rock for the Prudhoe Bay Oil Field and neighboring reserves is also a potential source for tight oil and shale gas – it could contain "up to 2 billion barrels of technically recoverable oil and up to 80 trillion cubic feet of natural gas, according to a 2012 U.S. Geological Survey report."

In their 2013 article published in Oil & Gas Journal, Auers and Mayes suggest that the "recent pricing disconnects have created opportunities for astute crude oil blenders and refiners to create their own substitutes for waterborne grades (like Alaska North Slope (ANS)) at highly discounted prices. A "pseudo" Alaskan North Slope substitute, for example, could be created with a blend of 55% Bakken and 45% Western Canadian Select at a cost potentially far less than the ANS market price." They argue that there are financial opportunities for refineries capable of blending, delivering, and refining "stranded" crude blends, like Western Canadian Select (WCS) (which is suffering a price differential because it is stranded because of challenges getting to tidewater). In contrast to the light, sweet oil produced "from emerging shale plays in North Dakota (Bakken) and Texas (Eagle Ford) as well as a resurgence of drilling in older, existing fields, such as the Permian basin", the oil sands of Alberta is "overwhelmingly heavy." 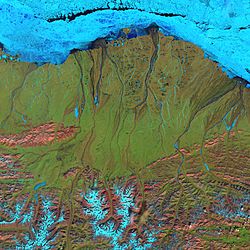 Landsat 7 false-color image of the North Slope. Along the coast, fast ice still clings to the shore in a solid, frozen sheet. At the top of the scene is the drifting sea ice. A dark blue strip of open water, known as a flaw lead, separates the fast ice from the drifting sea ice. The Brooks Range is visible at the bottom. (June 2001)

Within the North Slope, only a surface "active layer" of the tundra thaws each season; most of the soil is permanently frozen year-round. On top of this permafrost, water flows to sea via shallow, braided streams or settles into pools and ponds. Along the bottom of the Landsat 7 image on the right the rugged terrain of the Brooks Range mountains is snow-covered in places (blue areas) and exposed (pink areas) in others.

Much of the region is located in North Slope Borough.

All content from Kiddle encyclopedia articles (including the article images and facts) can be freely used under Attribution-ShareAlike license, unless stated otherwise. Cite this article:
Alaska North Slope Facts for Kids. Kiddle Encyclopedia.