Kids Encyclopedia Facts
For the town in the United Kingdom, see Prudhoe.

Prudhoe Bay or Sagavanirktok is a census-designated place (CDP) located in North Slope Borough in the U.S. state of Alaska. As of the 2010 census, the population of the CDP was 2,174 people; however, at any given time several thousand transient workers support the Prudhoe Bay oil field. The airport, lodging, and general store are located at Deadhorse; the rigs and processing facilities are located on scattered gravel pads laid atop the tundra. It is only during winter that the surface is hard enough to support heavy equipment, and new construction happens at that time.

Prudhoe Bay is the unofficial northern terminus of the Pan-American Highway. The Bay itself is still 10 miles further north than a security checkpoint so open water is not visible from the highway. A few tourists, arriving by bus after a two-day ride up the Dalton Highway from Fairbanks, come to see the tundra, the Arctic Ocean, and the midnight sun, staying in lodgings assembled from modular buildings. Tours must be arranged in advance (photo ID is required) to see the Arctic Ocean and the Bay itself.

Prudhoe Bay was named in 1826 by British explorer Sir John Franklin after his classmate Captain Algernon Percy, Baron Prudhoe. Franklin traveled along the coast from the mouth of the Mackenzie River almost to Point Barrow.

Prudhoe Bay, along with similar communities on the North shore of Alaska, features a Tundra climate (Köppen ET). Winters are long, very cold and due to its location above the Arctic Circle, some weeks in winter features days with a never rising sun. Summers, while bringing long daylight hours (even 24 hour days during some weeks) are still cold with temperatures just above freezing. 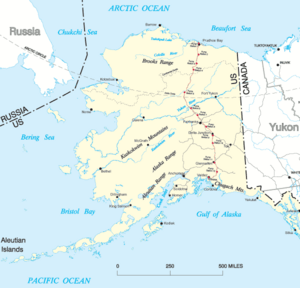 Map of Alaska, showing place names and the Trans-Alaska pipeline route in red. 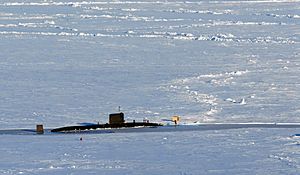 Prudhoe Bay is adjacent to the largest oil field in the United States.

All content from Kiddle encyclopedia articles (including the article images and facts) can be freely used under Attribution-ShareAlike license, unless stated otherwise. Cite this article:
Prudhoe Bay, Alaska Facts for Kids. Kiddle Encyclopedia.