Deadhorse is an unincorporated community in North Slope Borough, Alaska, United States, along the North Slope near the Arctic Ocean. The town consists mainly of facilities for the workers and companies that operate at the nearby Prudhoe Bay oil fields. Deadhorse is accessible via the Dalton Highway from Fairbanks, 495 mi (797 km) south, or Deadhorse Airport. Limited accommodations are also available for tourists.

The permanent population is variously listed as being between 25 and 50 residents. Temporary residents (employed by various firms with local interests) can range as high as 3,000.

The Prudhoe Bay, Alaska, area was developed to house personnel, provide support for drilling operations, and transport oil to the Alaskan pipeline. Prior to 1977, oil seeps (small pores or fissure networks through which liquid petroleum emerges at the surface of the land) on the Arctic coastal plain had caught the attention of the U.S. petroleum interests. The U.S. Navy drilled for oil between 1944 and 1953 with little success. However, in 1967, after several attempts at drilling for oil, oil company mergers, and competitive bidding for state lease sales, the Prudhoe Bay oil field was discovered.

Sources conflict on the origin of the area's name. The most cited theory appears to be that the area takes its name from a local business prominent in the late 1960s and 1970s, the "Dead Horse Haulers" trucking company. How the trucking company got its name remains in dispute. 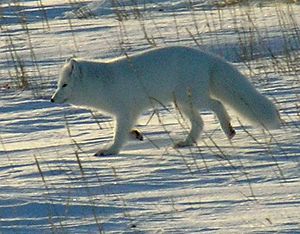 Arctic foxes are among the wildlife sometimes seen in the Deadhorse area.

Tourists traveling to Deadhorse and Prudhoe Bay typically take tour buses from Fairbanks via the James Dalton Highway, a two-day journey with an overnight stop in Coldfoot. During the summer months, visitors can arrange for tours to the arctic ocean via a guided tour only. There is no longer any public Arctic Ocean access from Deadhorse. All tours must be booked 24 hours in advance to allow time for background checks on all passengers going through the oilfield check point. Tourists can also experience the midnight sun due to Deadhorse's location above the Arctic Circle. In winter, the opposite phenomenon, polar night, occurs.

Because of the fact that alcoholic beverages are not sold in Deadhorse, a humorous slogan for the town is "All that far and still no bar."

This is the beginning or end of an Iron Butt Association motorcycle rider challenge called "The Ultimate Coast to Coast". This ride starts from Key West, Florida, and gives riders 30 days to reach Deadhorse, Alaska. It is also the midpoint of the "Haul Road 1000" and the beginning or end of the "Alaska Insanity Gold" challenge (riders allotted 24 hours for those two challenges).

Deadhorse features a borderline semi-arid-tundra climate (Köppen ET), as even the warmest month, July, has a daily average temperature of only 47 °F (8.3 °C) (Although Deadhorse reaches 80 °F (26.7 °C) an average of every 4 years, and there has never been a year where it didn't reach 70 °F (21.1 °C)). The mean annual temperature is 12 °F (−11 °C), with daytime temperatures reliably remaining below freezing from early/mid October to late April. As the area is located in USDA Plant Hardiness Zone 2, temperatures below −40 °F/°C can be expected during the height of winter.

All content from Kiddle encyclopedia articles (including the article images and facts) can be freely used under Attribution-ShareAlike license, unless stated otherwise. Cite this article:
Deadhorse, Alaska Facts for Kids. Kiddle Encyclopedia.