Kids Encyclopedia Facts
For the settlement and oil field in the US state of Alaska, see Prudhoe Bay, Alaska.

Prudhoe /ˈprʌdə/ is a medium-sized town just south of the River Tyne, in the southern part of the county of Northumberland, England, about 11 miles (18 km) west of the city of Newcastle upon Tyne. The town is sited on a steep, north-facing hill in the Tyne valley and nearby settlements include Ovingham, Ovington, Wylam, Stocksfield, Crawcrook, Hedley on the Hill and Mickley. Prudhoe has a population of over 11,500, measured at 11,675 in the 2011 Census. Today, it has largely become a commuter town for nearby Newcastle.

There has been a castle at Prudhoe since ancient times, when England was at war with Scotland. The area now known as Castlefields was a fruit orchard, and the Scots were rumoured to have burnt this orchard while attempting to capture Prudhoe Castle. The castle, originally owned by the D'Umfravilles, then the Percys and now English Heritage, is considered to be the only medieval fortification in Northumberland never to have been captured by the Scots.

In the 18th century, a small hamlet of farms was built in the Prudhoe area and, by the 1800s, a coal mine had been established at West Wylam. At that point, South Road was the main street, with a church and a row of cottages – similar to how it looks today.

During the Cold War, there was a Royal Observer Corps Underground Monitoring Post opposite Highfield Park, the surface features have since been demolished. It was 1 of approximately 1,563 similar underground monitoring posts built all across the UK during the Cold War to monitor the effects of a Nuclear strike. They were operated by the ROC who were mostly civilian volunteers who worked in groups of three inside the posts. Prudhoe ROC post was opened in June 1962 and closed in September 1991 after the collapse of the Soviet Union, which saw the end of the Cold War.

The town of Prudhoe is built on a steep, north-facing hill, with an elevation of up to 200 metres in the extreme south of the town. There is a prominent bend in the River Tyne, which the castle overlooks. To the south of Prudhoe is Prudhoe Moor, the very top of the town, and then a small valley where Prudhoe Hospital and Humbles Wood are located. As well as being steep and elevated, the land to the south of Prudhoe is heavily forested and rural. Further south are Hedley on the Hill, and then Ebchester over the County Durham border. Towards the north-east of Prudhoe Civil Parish is the steep Hagg Bank, which winds down to Hagg Bank Farm near Points Bridge on the riverside.

Via West Wylam and Eastwood Park, as well as Dukeshagg and Low Guards Wood, the eastern reaches of the town border the Metropolitan Borough of Gateshead, Tyne and Wear; near the A695 bypass is Stanley Burn, which flows out into the River Tyne at Wylam.

Prudhoe Civil Parish was recorded as having 11,500 residents at the publication of the 2001 official census, and the results included the following:

Prudhoe Castle is a Norman castle, which was for a long time involved in the border wars between England and Scotland. It was built by the de Umfraville family: the Norman Sir Robert de Umfraville was granted the freedom of Redesdale by William the Conqueror. For much of its history the castle was owned by the Percy family. It is now run by English Heritage. The castle is unique in being the only medieval defensive fortification in the whole of Northumbria (the modern counties of Northumberland, Tyne and Wear and County Durham to the south) to avoid capture by the Scots.

The majority of the surviving building work dates from the 12th century, although the site of Prudhoe Castle has strong Norman origins. In the 14th/15th centuries, the tower was extended to provide an extra level with turrets. Only the southwest turret survives to this day. 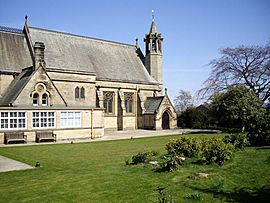 Our Lady and St Cuthbert – the church that moved

Prudhoe Hall (built 1868–70) and the Catholic Church of Our Lady and St Cuthbert in Prudhoe (built 1890–91, but incorporating the Cottier windows from an earlier smaller chapel built 1868–70) have some of Daniel Cottier's earliest stained glass. Matthew Liddell presumably commissioned Cottier to design the stained glass windows in both the main hall and the original chapel because his architect, Archibald Dunn, was impressed by the fact that Cottier had recently won a prize for the superb harmony of colours in his armorial window at the 1867 Paris International Exhibition. Indeed, Daniel Cottier has referred to his Paris prize in the graphite border of the large window in the main hall of Prudhoe Hall.

The stained glass in the small original chapel, which was opened on 19 October 1870, was eventually incorporated in the enlarged church of 1891 and then subsequently moved again a mile into the town of Prudhoe in 1904–05, when the Liddell family moved away from the area and could no longer support the Catholic mission, which Matthew Liddell had begun in 1870. The black-and-white photographs of the first chapel at Prudhoe Hall in Fr Paul Zielinski's book, The Church That Moved, show exactly the same windows containing the Cottier glass that have been retained in the larger church that replaced it. This means that the Cottier windows have been moved twice from their original site, and this would explain the necessity for so much extra remedial lead-work within some of the panes of glass, presumably repairing damage caused by two removals and two re-installations.

The small windows at Prudhoe Hall depicting idyllic naturalistic scenes of a rising sun over a river are especially beautiful, and seem to have a strong similarity to the work of Louis Comfort Tiffany. Made in about 1870, they pre-date by ten years or more the collaboration between Cottier and Tiffany in the 1880s in America. The swaying reeds in particular would seem to suggest that Cottier may well have been a significant influence on Tiffany before Tiffany returned the compliment as it were, and Cottier brought some of his ideas back into his own artistic creations in Scotland.

There is a memorial stone to John Wesley set in a low wall on South Road (outside the former Prudhoe Council offices), the former main street of the town, commemorating his visits to the town.

Towards the eastern edge of Prudhoe is West Wylam, home to an elderly care home, Prudhoe Town AFC, a small row of takeaways as well as a local NISA store and Eastwood Park; where several local football teams play their league games. The area also has allotments and Adderlane First School, which was opened in 1978. The last church on the estate, West Wylam Ebenezer Methodist Church, closed in 2014.

West of West Wylam, next to Prudhoe Castle, is the housing estate of Castlefields, which was mainly constructed between 1996 and 1999; and is rumoured to be the largest privately owned housing estate in the Tyne Valley, with 3–5-bedroom homes as well as several flats. Castlefields is considered a relatively modern area of the town, and it's not unusual for new people to move in due to the estate's attractive prices and reputation. The estate is constructed around Castlefields Drive, the main road that spans the whole of Castlefields, and the much older Broomhouse Lane, which originates at the top of the western Castlefields Drive hill, a pedestrianised lane which spans the southern backbone of the residential area and eventually becomes a main road that runs through West Wylam; all the way to Eastwood Park, a distance of about a mile.

Prudhoe is linked to Newcastle upon Tyne and the A1 by the A695 which used to pass through the centre of the town along Front Street. The A695 road now bypasses the town to the north through the industrial estate at Low Prudhoe. The better transport links of the new bypass have allowed the industrial estate to expand alongside the new road to the east, named Princess Way after the royal who opened SCA Hygiene.

Northumberland County Council sought a significant landmark feature adjacent to the new bypass, and commissioned the Prudhoe Badger under their 'percent for art' policy. The sculpture is 30m long, and was constructed with the help of drystone wallers in stone and marble. It was designed to integrate with the rural environment, create awareness about ecology and provide a link with the nearby Countryside Centre. The badger is sited adjacent to the roundabout on the A695 road at Low Prudhoe. 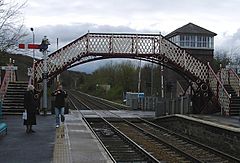 The town is served by Prudhoe railway station on the Newcastle and Carlisle Railway, also known as the Tyne Valley Line. The line was opened in 1838, and links the city of Newcastle upon Tyne with Carlisle. The line follows the course of the River Tyne through Northumberland. Passenger services on the Tyne Valley Line are operated by Northern and Abellio ScotRail. The line is also heavily used for freight. The next railway stations are those at Wylam and Stocksfield.

The town has direct bus links to Newcastle, Hexham and the MetroCentre. One can also travel from the nearby villages of Mickley and Stocksfield.

Prudhoe is home to a number of churches, which form as a meeting place for the local community. The churches include:

There is also a Kingdom Hall of Jehovah's Witnesses (NOW CLOSED)

Tyne Riverside Country Park in Low Prudhoe lies on the southern bank of the River Tyne. The park includes the artificial chalk hills known as the "Spetchells" which have attracted some natural chalk-loving flora and fauna not normally found in the region. It has been proposed that they be made 'sites of scientific interest'. A public bridleway runs from the country park to Hagg Bank, over the Points Bridge to Wylam. This area is a popular place for cyclists, runners and walkers alike and forms part of many fitness routes, with superb scenery and relatively flat and even terrain. Now forming a traffic-free part of National Cycle Network Route 72, it runs on the bed of a disused railway line to Newburn, Tyne and Wear, Newcastle upon Tyne, and on to the coast at Tynemouth.

Prudhoe Town Football Club are currently in the Wearside Football League, in the eleventh tier of the English football league system. The future of the club has recently been in doubt following the loss of its ground, Kimberley Park, in West Wylam.

Prudhoe Waterworld provides swimming and other fitness activities and is the home of Prudhoe Millennium Tapestry. The park at Waterworld is relatively modern and is a popular meeting place for those living in the northwest of town.

Prudhoe Golf Club is an 18-hole golf club to the east of the town. The area offers the choice of Eastwood, Close House and Clara Vale within a five-mile radius of the town.

The town has a skatepark, Highfield Park, which is located at the top of Prudhoe. This is a popular place for the young people of Prudhoe, though vandalism and anti-social behaviour have damaged the park's reputation. Here there is an annual Kite Festival and a skating competition, usually held during the summer months. Many people come here for recreational activities.

Prudhoe is the hometown of Ruth Archer, in the long-running BBC radio serial The Archers.

All content from Kiddle encyclopedia articles (including the article images and facts) can be freely used under Attribution-ShareAlike license, unless stated otherwise. Cite this article:
Prudhoe Facts for Kids. Kiddle Encyclopedia.