The present complex is on the site of the landmark Richfield Tower, that was designed in the Art Deco style by Morgan, Walls & Clements, and completed in 1929. It was the headquarters of the Atlantic Richfield oil company. It was demolished in the spring of 1969.

The current skyscraper complex was built as the ARCO Plaza, with a pair of 213.3 m (700 ft) 52-story office towers. One became the new world headquarters for the Atlantic Richfield Company (ARCO), the present day Paul Hastings Tower. An underground shopping complex was accessed by open escalators from the street level plaza.

In 1986, joint owners ARCO and Bank of America sold the buildings to Shuwa Investments Corp., the American subsidiary of Shuwa Co. of Tokyo, for $650 million while both remained tenants in their respective named towers. Shuwa later sold the property in 2003 to Thomas Properties Group and other investors for $270 million.

The towers are constructed of steel frames covered with polished panels of forest green granite and panes of bronze glass, however, in 2016, the exterior of the top two floors and the service roof of The Paul Hastings Tower were modified on the north, east, and south flanks to house their upgraded headquarters and offices. This modification features silver trim and panes of light green glass panels.

The ARCO Plaza complex was renamed City National Plaza in 2005, and the south and north towers, respectively, were renamed City National Tower and Paul Hastings Tower. The low-rise building at the back of the plaza is known as the Jewel Box, and is occupied by the Gensler architectural firm. Gensler moved from Santa Monica to the Jewel Box in 2011. 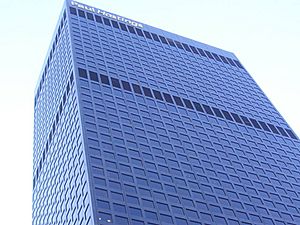 ARCO Plaza opened with a 220,000 sq ft (20,000 m2) shopping center on two levels which gained attention for the novelty of a shopping center within an office tower complex and for its sleek design of brick walkways, tiled and mirrored escalator wells and fresh flowers. There were over 40 shops and services and over 10 restaurants including “François”. During the 2004 renovation, the lower shopping level was converted to parking and today the one remaining level is a food court.

All content from Kiddle encyclopedia articles (including the article images and facts) can be freely used under Attribution-ShareAlike license, unless stated otherwise. Cite this article:
City National Plaza Facts for Kids. Kiddle Encyclopedia.