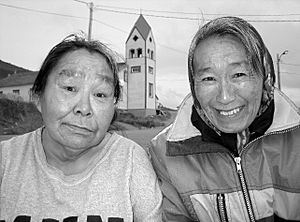 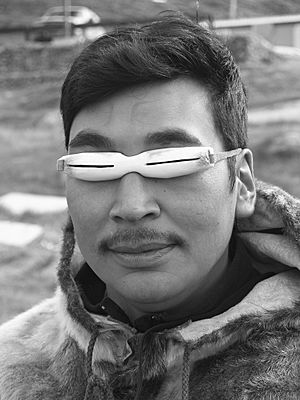 The Inuit are one of many groups of First Nations who live in very cold places of northern Canada, Greenland, the Arctic, and Alaska.

They are sometimes called Eskimos, a word which likely comes from the Algonquin language and may mean "eater of raw meat". Most Inuit prefer to be called by their own name, either the more general Inuit particularly in Canada or their actual tribe name. Inuit is a tribe name but not all indigenous Arctic peoples in North America are Inuits. Particularly in the United States Alaska, the word Eskimo would be accepted as a more general term, but would probably refer to themselves by their tribe name. Inuit in Canada and Greenland like the name Inuit because it is their own name for themselves. Inuit means more than one, one person is an "Inuk". The native Greenlanders are related to the Inuit. The language of the Inuit is Inukittut, and it is one of the official languages of Nunavut and of the Northwest Territories in Canada. Eskimo is a term more frequently used in mainstream United States where the concerns and sensibilities of Arctic peoples are easily dismissed as they have little political power in that country.

Inuits in Alaska have various concerns, such as protecting the caribou from American oil pipelines. Anti-seal hunt campaigns work to eliminate this aspect of northern culture, which most inuits regard as vital to their lives. 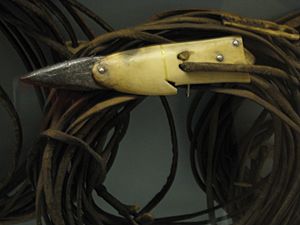 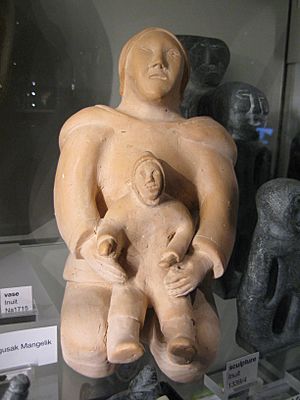 An Inuit sculpture on display at UBC’s Museum of Anthropology in Vancouver, BC, Canada

Inuit ate both raw and cooked meat and fish. Whale blubber was burned as fuel for cooking and lamps. Inuit were also nomads, but they did not domesticate any animals except for dogs, which they used to pull their sleds and help with the hunting. They were hunter/gatherers, living off the land. They were very careful to make good use of every part of the animals they killed. Respect for the land and the animals they harvested was and is a focal part of their culture.

Inuit lived in tents made of animal skins during the summer. In the winter they lived in sod houses and igloos. They could build an igloo out of snow bricks in just a couple of hours. Snow is full of air spaces, which helps it hold in warmth. With just a blubber lamp for heat, an igloo could be warmer than the air outside. The Inuit made very clever things from the bones, antlers, and wood they had. They invented the harpoon, which was used to hunt seals and whales. They built boats from wood or bone covered with animal skins. They invented the kayak for one man to use for hunting the ocean and among the pack ice.

Inuit sleds could be built from wood, bone, or even animal skins wrapped around frozen fish. Dishes were made from carving soapstone, bones, or musk ox horns. They wore two layers of skins, one fur side in, the other facing out, to stay warm.

Inuit had to be good hunters to survive. When an animal was killed in a hunt, it was thanked respectfully for offering itself to the hunter. They believed it intended to provide itself as a gift towards the survival of the hunter and his children. Their gratitude was deeply sincere and is an important aspect of their belief system. In the winter, seals did not come out onto the ice. They only came up for air at holes they chewed in the ice. Inuit would use their dogs to find the air holes, then wait patiently until the seal came back to breathe and kill it with a harpoon. In the summer, the seals would lie out on the ice enjoying the sun. The hunter would have to slowly creep up on a seal to kill it. The Inuit would use their dogs and spears to hunt polar bears, musk ox, and caribou. Sometimes they would kill caribou from their boats as the animals crossed the rivers on their migration. The Inuit even hunted whales. From their boat, they would throw harpoons that were attached to floats made of inflated seal skins. The whale would grow tired from dragging the floats under the water. When it slowed down and came up to the surface, the Inuit could keep hitting it with more harpoons or spears until it died. Whale blubber provide Vitamin D and Omegas to their cultural diet, and prevented rickets. The whaling industry around the world has depleted the whale population by massive commercial hunting, and now traditional whale hunting for subsistence purposes is rare around the world. Industrialization of the world has also contributed to pollution causing high mercury levels in much sea life, including whales. This has made it necessary to add to the modern northern diet with grocery foods, which are normally very expensive in the north. 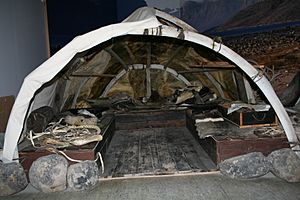 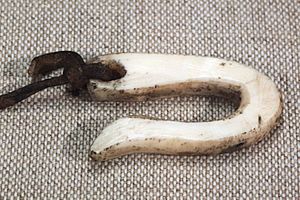 During the summer months, the Inuit were able to gather berries and roots to eat. They also collected grass to line their boots or make baskets. Often the food they found or killed during the summer was put into a cache for use during the long winter. A cache was created by digging down to the permafrost and building a rock lined pit there. The top would be covered with a pile of rocks to keep out the animals. It was as good as a freezer, because the food would stay frozen there until the family needed it. Inuit cultural traditions and traditional stories provided each new generation with the lifeskills and knowledge to survive their environment and work together. They usually moved around in small groups looking for food, and sometimes they would get together with other groups to hunt for larger animals such as whales. The men did the hunting and home building, and also made weapons, sleds, and boats. The women cooked, made the clothes, and took care of the children.

Today, most Inuit live in modern houses. Many still hunt or fish for a major part of their food supply and sometimes some income. Seal pelts are used to protect from the extreme cold in the Arctic and are far more effective than man made fabrics. The technology behind it has been clearly proven throughout the history of Inuit people. Besides, the affordability of commercial winterwear is an expensive barrier. They use rifles and snowmobiles when hunting now, however traditional values respecting the animals hunted still very much applies. In Alaska, many of the people have received money from the oil discovered in that state on their traditional lands. The Arctic is very different from the rest of the world that the way of life in the south does not work well in the north. Canada values having Inuit peoples in Canada's northernmost lands as irrefutable proof of sovereignty over the Canadian portion of the Arctic Circle. It's a very challenging living in an Arctic environment, and not for the faint of heart.

All content from Kiddle encyclopedia articles (including the article images and facts) can be freely used under Attribution-ShareAlike license, unless stated otherwise. Cite this article:
Inuit Facts for Kids. Kiddle Encyclopedia.