Noatak (Inupiaq: Nuataaq) is a census-designated place (CDP) in the Northwest Arctic Borough in the U.S. state of Alaska. The population was 514 at the 2010 census, up from 428 in 2000. It is served by Noatak Airport. 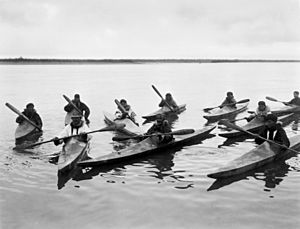 Noatak was established as a fishing and hunting camp in the 1800s. Two identifiable groups of Inupiat resided on the Noatak River. The Nautaagmiut (called "Noatagamut" in the 1880 census), Inupiaq for "inland river people", lived upriver, and the Napaaqtugmiut, meaning "people of the trees", lived downriver. By the early 20th century, the missionaries Robert and Carrie Samms settled in what they called "Noatak". A United States post office was established in 1940.

Noatak first appeared on the 1880 U.S. Census as an unincorporated Inuit village of "Noatagamute." All 400 of its residents were Inuit. It did not return again until 1910, this time as Noatak. It has returned on every successive census to date. It was made a census-designated place (CDP) in 1980. 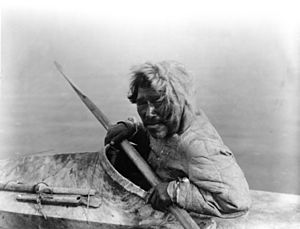 There were 100 households, out of which 69.0% had children under the age of 18 living with them, 56.0% were married couples living together, 22.0% had a female householder with no husband present, and 10.0% were non-families. 9.0% of all households were made up of individuals, and none had someone living alone who was 65 years of age or older. The average household size was 4.28 and the average family size was 4.51.

Noatak has a 4,000-foot (1,200 m) gravel public airstrip and is primarily reached by air. No road goes to Noatak. Snowmobiles, ATV's, and small boats are important means of inter-village travel and for local subsistence activities.

The Napaaqtugmiut School, operated by the Northwest Arctic Borough School District, serves the community. Its current building opened in 2008. As of 2017[update] it had 177 students, with Alaska Natives making up 95% of the student body.

All content from Kiddle encyclopedia articles (including the article images and facts) can be freely used under Attribution-ShareAlike license, unless stated otherwise. Cite this article:
Noatak, Alaska Facts for Kids. Kiddle Encyclopedia.