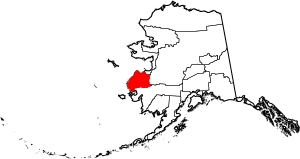 Kusilvak Census Area, formerly known as Wade Hampton Census Area, is a census area located in the U.S. state of Alaska. As of the 2010 census, the population was 7,459. It is part of the unorganized borough and therefore has no borough seat. Its largest community is the city of Hooper Bay, on the Bering Sea coast.

The census area was originally named for Wade Hampton III, a South Carolina politician whose son-in-law, a territorial judge in Nome, posthumously named a mining district in western Alaska for him in 1913. The district eventually became the census area, retaining its name. Over the next century, the name became increasingly controversial, with Native residents and others arguing Hampton's name did not represent Alaska and that his personal history as a slave-holding Civil War general was a blemish on the region. In July 2015, after a massacre in a historic black church in South Carolina generated a backlash against Confederate and white supremacist symbols nationwide, Alaska Governor Bill Walker formally notified the U.S. Census Bureau that the census area was being renamed after the Kusilvak Mountains, its highest range.

In the 2006 American community survey, the Kusilvak Census Area had the largest increase in Hispanic population since 2000 with a 1572.73% increase.

The census area's per-capita income makes it one of the poorest places in the United States.

All content from Kiddle encyclopedia articles (including the article images and facts) can be freely used under Attribution-ShareAlike license, unless stated otherwise. Cite this article:
Kusilvak Census Area, Alaska Facts for Kids. Kiddle Encyclopedia.