There is a tri-language system in Chevak; English, Cup’ik, and a mixture of the two languages. The people in Chevak speak a dialect of Central Yup'ik, Cup'ik (pr. Chew-pick), and identify themselves as Cup'ik people rather than Yup'ik. This unique identity has allowed them to form a single-site school district, the Kashunamiut School District, rather than joining a neighboring Yup'ik school district. The Cup'ik dialect is distinguished from Yup'ik by the change of "y" sounds into "ch" sounds, represented by the letter "c", and by some words that are completely different from Yup'ik words. 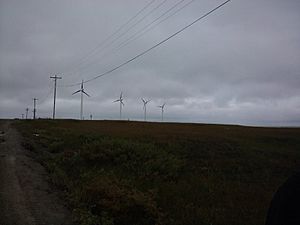 Chevak is powered by four 30-meter-tall wind turbines. The wind generated in Chevak is classified as "Class 6 – Outstanding", and is owned and operated by AVEC (Alaska Villages Electric Cooperative).

There were 167 households, out of which 64.1% had children under the age of 18 living with them. 41.3% were married couples living together, 20.4% had a female householder with no husband present, and 22.2% were non-families. 19.2% of all households were made up of individuals and 0.6% had someone living alone who was 65 years of age or older. The average household size was 4.58 and the average family size was 5.38.

John Pingayak, an actor and educator, won the Milken Educator Awards in 1992 and played an Inupiat whaling captain in the 2012 film Big Miracle, about the rescue of two gray whales in Utqiaġvik, Alaska in 1988.

All content from Kiddle encyclopedia articles (including the article images and facts) can be freely used under Attribution-ShareAlike license, unless stated otherwise. Cite this article:
Chevak, Alaska Facts for Kids. Kiddle Encyclopedia.