Marshall (Central Yupik: Masserculleqcode: esu is deprecated ) is a city in Kusilvak Census Area, Alaska, United States. At the 2010 census the population was 414, up from 349 in 2000.

According to the United States Census Bureau, the city has a total area of 4.7 square miles (12 km2), all of it land. 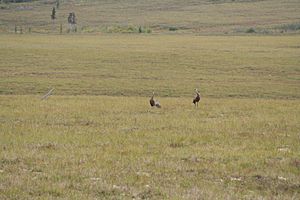 There were 91 households, out of which 59.3% had children under the age of 18 living with them, 48.4% were married couples living together, 22.0% had a female householder with no husband present, and 18.7% were non-families. 15.4% of all households were made up of individuals, and 1.1% had someone living alone who was 65 years of age or older. The average household size was 3.84 and the average family size was 4.23.

Marshall's previous name, changed in 1984, from Fortuna Ledge, was a mining village in the 1800s and early 1900s, with mining operations in Wilson Creek, just down river from the Ledge. With that, many Alaska Natives were moved from other villages, as far away as Unalakleet, Ohogamuit and Takchak. With that, there are two main Native groups, the Yupik descendants, hailing from both Takchak and Ohogamuit, and the Inupiaq descendants, hailing from Unalakleet. Along with those of Native descent, Marshall hosts a population of people of Russian descendant mixed with Inupiaqs and has become a Yup'ik/Inupiaq/Russian community.

All content from Kiddle encyclopedia articles (including the article images and facts) can be freely used under Attribution-ShareAlike license, unless stated otherwise. Cite this article:
Marshall, Alaska Facts for Kids. Kiddle Encyclopedia.