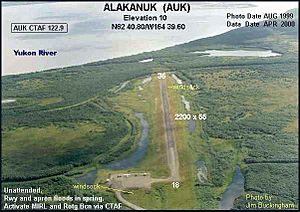 Alakanuk (ah-LUCK-uh-nuck) (Alarneq in Central Yup'ik) is a 2nd-class city in the Kusilvak Census Area of the Unorganized Borough in the western part of the U.S. state of Alaska. As of the 2000 census, the population of the city was 652.

Alakanuk is located at the east entrance of Alakanuk Pass, the major southern channel of the Yukon River, 15 miles (24 km) from the Bering Sea. It is part of the Yukon Delta National Wildlife Refuge. It lies 8 miles (13 km) southwest of Emmonak, approximately 162 miles (261 km) northwest of Bethel. It is the longest village on the lower Yukon - the development stretches over a 3-mile (4.8 km) area along the Pass. Approximately 25 homes along the bank are being threatened by erosion.

The climate of Alakanuk is subarctic, averaging 60 inches (1,500 mm) of snowfall and 19 inches (480 mm) of total precipitation per year. Temperatures range from between −25 to 79 °F (−32 to 26 °C). Heavy winds are frequent during the fall and winter. The Yukon River is used as an ice road during freeze-up, from November through May.

Alakanuk is a Yup'ik word meaning "wrong way" or "mistake village", aptly applied to a village on this maze of watercourses. The village was first reported by G.R. Putnam of the U.S. Coast & Geodetic Survey in 1899. It was originally settled by a Yup'ik shaman named Anguksuar and his family. A Catholic mission school was built near the village. A post office was established in 1946. In 1948, the school was relocated to St. Mary's, and many families moved from the old school site to Alakanuk. It incorporated as a second-class city in 1969.

A federally recognized tribe is located in the community—the Village of Alakanuk.

There were 139 households out of which 59.7% had children under the age of 18 living with them, 57.6% were married couples living together, 12.9% had a female householder with no husband present, and 15.1% were non-families. 10.8% of all households were made up of individuals and 2.9% had someone living alone who was 65 years of age or older. The average household size was 4.69 and the average family size was 5.19.

The City operates the water and piped sewer system and the central watering point. Approximately 90% of homes are connected. There is a sewage lagoon available for individuals to dump their honey buckets. The City Council is the policy-making body for the utility. Water is derived from the Alakanuk Slough, is treated, stored in a tank, and piped to most of the community. In 1998, 83 homes, the school and teachers' housing were connected to a new piped system. New facilities include a water treatment plant, heated 300,000-gal. water storage tank, vacuum sewage plant, sewage lagoon, Arctic piping, and household plumbing. A new subdivision is currently underway, and nine homes will be connected to the piped utilities. The city has funding from DEC for service connections to 20 homes. Ten homes have been moved from the erosion zone on the river bank and are ready for service. The city is planning to move an additional 10 homes. AVCP is building a 9-home subdivision, including water and sewer mains and service connections, for occupancy in 2002. The city completed a feasibility study for service area 7, which is the area across the river, and would like to obtain funding to make this expansion. The landfill is reported as inactive. Electricity is provided by AVEC. There is one school located in the community, attended by 211 students. Local hospitals or health clinics include Alakanuk Health Clinic and Pearl E. Johnson Sub-Regional Clinic in Emmonak. Alakanuk Health Clinic is a Primary Health Care facility. Alakanuk is classified as an isolated village, it is found in EMS Region 7A in the Yukon/Kuskokwim Region. Emergency Services have coastal and air access. Emergency service is provided by a health aide

Alakanuk Airport, a State-owned 2,200' long by 55' wide gravel airstrip, is available. An airport relocation project is underway, due to erosion. Grant Aviation, Hageland Aviation and Tanana Air Service offer passenger flight service. Alakanuk is easily accessible from the Yukon River and Bering Sea by barge and riverboat. Most passengers and mail arrive by air. There are no roads connecting Alakanuk with other population centers in the region, but ice roads are used in winter. Snowmachines and boats are used for local travel.

Taxes: Sales: 4%, Property: None, Special: None

All content from Kiddle encyclopedia articles (including the article images and facts) can be freely used under Attribution-ShareAlike license, unless stated otherwise. Cite this article:
Alakanuk, Alaska Facts for Kids. Kiddle Encyclopedia.