Albatrosses belong to family Diomedeidae of the order Procellariiformes, along with shearwaters, fulmars, storm petrels, and diving petrels. They share certain identifying features. First, they have nasal passages that attach to the upper bill called naricorns; the nostrils of the albatross are on the sides of the bill. The bills of Procellariiformes are also unique in that they are split into between seven and nine horny plates. Finally, they produce a stomach oil made up of wax esters and triglycerides that is stored in the proventriculus. This is used against predators as well as an energy rich food source for chicks and for the adults during their long flights.

This species was once considered conspecific with the northern royal albatross (Diomedea sanfordi) as the royal albatross. The split into two species is widely though not universally accepted: it is recognized by, for example by, BirdLife International, Brooke, and Robertson & Nunn, but not by Clements, while the American Ornithologists' Union has recognized the need for a proposal. 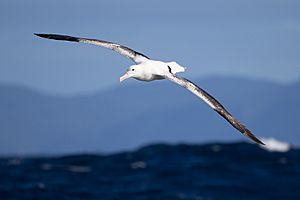 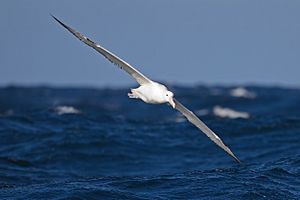 Diomedea refers to Diomedes, a figure from Greek mythology whose companions turned to birds.

The southern royal albatross has a length of 112 to 123 cm (44–48 in) and a mean weight of 8.5 kg (19 lb). At Campbell Island, 11 males were found to have a mean mass of 10.3 kg (23 lb) and 7 females were found to have a mean mass of 7.7 kg (17 lb), thus may be heavier on average than most colonies of wandering albatross. Males are about 2 to 3 kg (4.4 to 6.6 lb) heavier than females. Average wingspan has been reported from 2.9 to 3.28 m (9.5 to 10.8 ft), with an upper limit of about 3.51 m (11.5 ft). The wandering albatross can exceed this species in maximum size and averages slightly larger in linear dimensions if not bulk, but the two species are close enough in dimensions that size cannot be used to distinguish between them. The juvenile has a white head, neck, upper mantle, rump, and underparts. There are black speckles on the mantle, and dark brown or black wings with white flecks on coverts. The tail is white except for the black tip as is the under-wing. Young birds soon lose the black on their tail and backs. White appears on the upperwing gradually, as speckles starting from the leading edge. All ages have a pink bill with black on the cutting edge on the upper mandible, and the legs are flesh-coloured. Young birds with all-dark upperwings can be hard to differentiate from the northern royal albatross. There are clear but subtle differences from the wandering albatross, with the southern royal having a clean black and white appearance, lacking the peach neck spot often found on the wandering albatross. Most wandering albatrosses have dark feathers in the tail and crown and the white in this species expands from the middle of the wing, in larger blotches. The bill color is also slightly paler, as well as the dark cutting edge along the middle. The average life span is 58 years.

Most of the royal albatross population is found between 30° S and 45° S. The majority of the world's population of southern royal albatrosses nest on the rat free Subantarctic Campbell Island, around 8,200 to 8,600 pairs. There are smaller colonies on Adams Island and Auckland Island in the Auckland Islands, 20 pairs combined, and 69 pairs on Enderby Island and some sanfordi × epomophora hybrids at the northern royal albatross colony on the Otago Peninsula in New Zealand. They range along the southern oceans concentrating on the west and east coast of southern South America, and also in the waters surrounding New Zealand.

The southern royal albatross eats squid and fish, with smaller amounts of carrion, crustaceans, and salps. Its foraging activities normally take place within a 1250 km radius of the breeding site. Although they travel vast distances, royal albatrosses in general tend to forage in somewhat shallower waters and closer to continental shelves than wandering albatrosses. 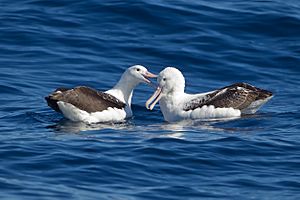 They prefer to nest on tussock grassland, plateaus, or ridges, and will lay one egg biennially. This will normally take place in November or December. Both parents will incubate the egg, and rear the young. There is very low mortality rates of the laid eggs once the parents settle in. When feeding the young they will range south to the Campbell Plateau and north to the Chatham Rise.

The population is recovering from its severe downward spiral in the late 19th and early 20th centuries. By the 1880s, this albatross was extirpated from Auckland Island and Enderby Island. Pigs and cats are still a problem, as they take chicks and eggs, on Auckland Island. Longline fishing is a major problem and a possible emerging threat is Dracophyllum, a scrub that is taking away from their nesting range.

All content from Kiddle encyclopedia articles (including the article images and facts) can be freely used under Attribution-ShareAlike license, unless stated otherwise. Cite this article:
Southern royal albatross Facts for Kids. Kiddle Encyclopedia.