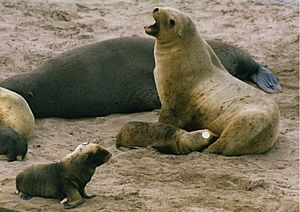 A New Zealand sea lion nursing on the beach

Evidence has been found of Polynesian settlement in the 13th and 14th centuries. This was at Sandy Bay, in a sheltered and relatively less inhospitable location, accessible to seal colonies.

On 20 March 1887, the Derry Castle, an iron barque registered in Boston, Massachusetts, ran aground off of Enderby Island nine days into its journey. The ship was en route from Geelong, Victoria to Falmouth, Cornwall and was manned by a crew of twenty-three. It carried one passenger and a cargo of wheat. The Derry Castle was owned by P. Richardson & Co. and was under the command of Captain J. Goffe. The surviving members of the Derry Castle crew found a castaway depot at Sandy Bay on Enderby Island. They proceeded to construct some further crude shelters around this depot. On a cliff overlooking the water, they buried the bodies of their fellow crew members that had washed ashore. The grave was marked with the ship's figurehead.

After 192 days the Derry Castle was officially posted as missing by Lloyd's of London. On 21 September 1887, a 45-ton steamer, the Awarua, arrived in Hobson's Bay, Victoria, returning from an illegal sealing expedition in the Auckland Islands. On board the Awarua were the remaining eight survivors from the Derry Castle.

The Derry Castle grave site was maintained for many years by the New Zealand government until it sank into the ground. However, during World War II, the figurehead was resurrected by coastwatchers stationed on the islands in the Cape Expedition programme. The figurehead can now be viewed (along with other items from the wreck) at the Canterbury Museum in Christchurch. In its place, a tombstone now marks the site of the sailors' graves. 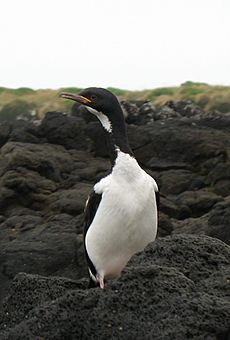 An Auckland shag on Enderby Island

Enderby Island was cleared of introduced species, such as cattle, pig, rabbit and rat in 1994, and by 2015 the abundance of wildlife was notable compared with Auckland Island. The island is part of the Auckland Island group Important Bird Area (IBA), identified as such by BirdLife International because of the significance of the group as a breeding site for several species of seabirds as well as the endemic Auckland shag, Auckland teal, Auckland rail and Auckland snipe.

A distinct variety of rabbit lived on Enderby Island. Rabbits are not indigenous to the island; their ancestors were brought from Australia in October 1865 to serve as food for shipwreck survivors. Following their introduction, the population was isolated for almost 130 years. The rabbits were eradicated from the island in the early 1990s, though some were rescued and the breed survives in captivity. Enderby Island rabbits are predominantly silver-grey in colour but a recessive gene ensures that a small percentage is cream or beige.

As with rabbits, cattle were introduced to Enderby Island in the late 19th century. Shorthorn cattle were brought to the island by whalers in 1894 where they proceeded to survive on kelp and other island flora, becoming a distinctive wild variety. By the mid-1980s, the cattle had nearly denuded Enderby Island of its growth, a problem that came to the attention of New Zealand's Department of Conservation. In response, efforts were made to eradicate cattle on the island. By the mid-1990s, only one cow, 'Lady', remained. Lady was taken to mainland New Zealand in February 1993. Since then she has been the subject of intense efforts to save the variety, efforts that have included cloning. Lady died in May 2009, aged more than twenty years. 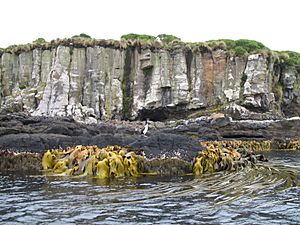 A view of the Enderby Island coastline, showing its volcanic composition (and an Auckland shag on the rocks).

Enderby Island is perched on the Campbell Plateau and is composed of eroding volcanic remains from eruptions that occurred between 25 and 10 million years ago.

All content from Kiddle encyclopedia articles (including the article images and facts) can be freely used under Attribution-ShareAlike license, unless stated otherwise. Cite this article:
Enderby Island Facts for Kids. Kiddle Encyclopedia.