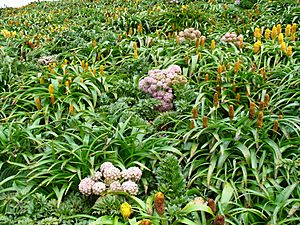 A megaherb community on Campbell Island, one of the subantarctic islands of New Zealand; the yellow flowers and strap-like leaves are Bulbinella rossii, the Ross Lily, while the pink flowers are those of the Campbell Island Carrot, Anisotome latifolia

Megaherbs are a group of herbaceous perennial wildflowers growing in the New Zealand subantarctic islands. They are characterised by their great size, with huge leaves and very large and often unusually coloured flowers, which have evolved as an adaptation to the harsh weather conditions on the islands.

Livestock introduced to the islands in the 19th century severely reduced the megaherb population, to such an extent that by the late 20th century the megaherbs were threatened with extinction. Since the removal of the livestock in 1993, the megaherbs have regenerated successfully and dramatically.

Megaherbs occur on many of the subantarctic islands of New Zealand, predominantly on the Snares island group, the Auckland Islands and the Campbell Island group. The plants evolved in response to the climatological and soil conditions and the lack of herbivores on the islands. The weather is largely wet, cold and extremely windy; the soil peaty, acidic and impoverished. The almost continual cloud cover means that the islands experience low light levels.

The term 'megaherb' was first used by James Clark Ross during his 1839–43 Antarctic expedition. Joseph Dalton Hooker, the expedition's botanist, wrote in the Flora of Lord Auckland and Campbell's Islands that the megaherbs produced "a floral display second to none outside the tropics".

Although small in size when compared to plants found in the tropics, megaherbs are notable because their size is far greater than other herbaceous perennials found growing in the subantarctic islands: generally the harsh weather and soil conditions experienced there have a stunting effect on plants.

Most subantarctic megaherbs flower en masse in a cycle of approximately three years; in "off" years a few plants will flower but with nowhere near the effect created by the mass flowering.

A major component of megaherb communities is Bulbinella rossii (Ross Lily). This clump-forming plant has strap-like and succulent leaves, growing to 60 centimetres (24 in). The bright yellow flowering spikes are carried on stems up to 90 centimetres (35 in) high. Its nearest relatives appear to be Bulbinella hookeri (Maori Lily) from the New Zealand mainland, and Bulbinella floribunda (Yellow Cat-tail) from South Africa.

Anisotome latifolia (Campbell Island Carrot) bears pink flowers in huge clusters which can reach 75 centimetres (30 in) across, on stems up to 1.5 metres (4.9 ft).

Pleurophyllum speciosum (Campbell Island Daisy) appears to be closely related to the Cineraria daisies of Africa and the Canary Islands. It forms an enormous rosette, up to 1.2 metres (3.9 ft) across, of huge, broad pleated leaves. It bears pinkish-purple to pale lilac flowers with maroon centres, held on flower stems up to 60 centimetres (24 in) tall.

Two other Pleurophyllum species, Pleurophyllum hookeri and Pleurophyllum criniferum (giant button daisies) are also megaherbs, reaching 90 centimetres (35 in) in height and with similar broad leaves. The flowers of P. hookeri are crimson whilst those of P. criniferum are nearly black. Natural hybrids between these species have been recorded.

The Black-eyed Daisy Damnamenia vernicosa bears white flowers that are 5 centimetres (2.0 in), although the plant grows only to 10 centimetres (3.9 in) high.

Stilbocarpa polaris (Macquarie Island Cabbage) is a member of the Aralia family. It grows in clumps to 90 centimetres (35 in) tall with fluted, rhubarb-like leaves and lime green flower clusters up to 60 centimetres (24 in) cm wide.

Growing alongside the megaherbs are other plants, such as hebes, daisies, amber sedge, and three species of gentian: Gentianella cerina (giant gentian), growing to 15 centimetres (5.9 in) tall with flowers 2.5 centimetres (0.98 in) across, varying in colour from white to pale pink, red and purple; Gentianella antarctica and Gentianella concinna, both with pinkish red flowers.

The New Zealand subantarctic islands are uninhabited by humans (apart from scientific research staff at a meteorological station on Campbell Island). In the nineteenth century, foraging livestock including rabbits, pigs, sheep, goats and cattle were introduced in order to provide support for potential shipwreck victims. The feral livestock populations increased to such an extent that their grazing seriously depleted the megaherbs. The New Zealand Department of Conservation began removing all introduced species in 1987; this was completed by 1993. The speed and extent of the regeneration witnessed in 1996, a mere three years later, astonished visiting botanists.

The collection of megaherbs is prohibited. Specimens of legally-collected megaherbs growing in botanic gardens at Invercargill in New Zealand's South Island seem sickly and puny compared to the wild populations. Megaherbs have evolved to grow in the very specific set of weather and soil conditions experienced on the subantarctic islands and fail to thrive in seemingly more benign conditions.

All content from Kiddle encyclopedia articles (including the article images and facts) can be freely used under Attribution-ShareAlike license, unless stated otherwise. Cite this article:
Megaherb Facts for Kids. Kiddle Encyclopedia.