Como Bluff is a long ridge extending east-west, located between the towns of Rock River and Medicine Bow, Wyoming. The ridge is an anticline, formed as a result of compressional geological folding. Three geological formations, the Sundance, the Morrison, and the Cloverly Formations, containing fossil remains from the Late Jurassic of the Mesozoic Era are exposed. Nineteenth century paleontologists discovered many well-preserved specimens of dinosaurs, as well as mammals, turtles, crocodilians, and fish from the Morrison Formation. Because of this, Como Bluff is considered to be one of the major sites for the early discovery of dinosaur remains. Among the species discovered is the only known specimen of Coelurus. Significant discoveries were made in 22 different areas scattered along the entire length of the ridge. It is included on the National Register of Historic Places as well as the National Natural Landmark list.

The discovery of dinosaurs at Como Bluff has been recounted numerous times, most notably by Schuchert and LeVene, Shur, Ostrom and McIntosh, and Jaffe. Most of the specimens were collected by men working for O.C. Marsh between 1877-1889, although some were collected by the Hubbel brothers for E.D. Cope between 1879-1880. The American Museum of Natural History excavated in 1897 [1]-1898 [2], finding two partial skeletons of sauropods. A summary of the quarries and their contents is given below.

In later years, the American Museum of Natural History and Yale University jointly reopened Quarry 9, the Mammal Quarry, 1968-1970, finding only a few specimens. More recently, Robert Bakker has done some collecting there with a variety of groups. 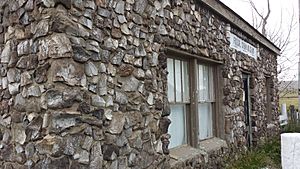 The famous Fossil Cabin at Como Bluff, built in 1932 from broken dinosaur bones.

All content from Kiddle encyclopedia articles (including the article images and facts) can be freely used under Attribution-ShareAlike license, unless stated otherwise. Cite this article:
Como Bluff Facts for Kids. Kiddle Encyclopedia.