The historic town of Saguache is a Statutory Town that is the county seat of Saguache County, Colorado, United States. The population was 493 at the U.S. Census 2010.

Saguache is a small historical village located in an agricultural area in southern Colorado at the northern gateway to the San Luis Valley, a valley between the Sangre de Cristo Range on the east and the San Juan Mountains to the west. Saguache Creek flows through the town from its beginnings high in the San Juan mountains. The site has been known for centuries to Native Americans who moved down from their summer homes in the mountains to the valley during the winter months. The Spanish began to move into the area in the 1600s and Spanish sheepherders passed through each year as they drove their flocks into the hills for summer grazing. Later the early white settlers and miners passed through this area, many seeking passage west along the Old Spanish Trail. In the mid-1860s, the first permanent white settlements were established in Saguache and the nearby town of Villa Grove. Saguache County was officially founded in 1866. 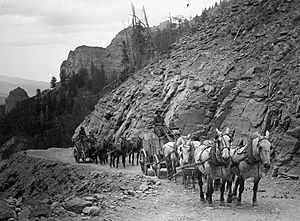 The formation of the town was influenced by the occupations and needs of the era. Beginning as a trading post, in the late 1800s mining became a significant influence as the Colorado mining boom brought hundreds of mining operations to the surrounding mountains and the miners needed a steady supply of food and other goods.

The town was founded by Otto Mears, who came to Saquache in 1867. Mears constructed a wheat thresher and a grist mill for thrashing and grinding wheat to make flour to supply Saquache and the surrounding mines. He also built toll roads over the nearby mountain passes to use for hauling supplies to mining camps to the north, and to further open the area to settlement. The Saguache Town Company was formed in 1874 turning Saquache into a booming supply town. Mears also established a newspaper, the Saguache Chronicle, to attract pioneers to Saguache. He is most famous for his later work, the building of the famous Million Dollar Highway.

From its early days as a boom town, the population of Saguache has shrunk to around 500 residents. In its heyday, Saquache could boast of having "the Colorado Hall (serving the purest wines and liquors), the Saguache Meat Market, a boarding house, a grocery, law firms, a hardware store, a hotel, a sawmill, and The Saguache Chronicle newspaper." After several name changes, The Saguache Chronicle eventually became The Saguache Crescent. The paper is still printed every week on a flatbed press built in 1915 with metal type cast on a Linotype composing machine. The Linotype may be the only one still in use in the United States. It is also still the county’s “paper of record,” and is operated by a third generation descendant of the family who purchased it in 1917.

According to a 2013 Denver Post article entitled, "What's in a Colorado name pronunciation?", the name Saguache (pronounced) comes from a Ute language word meaning "sand dune". A Native American, Naranjo, explains the history of the name: "The Utes don't have an alphabet. The way the immigrants heard it, the way you hear it, is how they spelled it. The word is 'sə wŭp;' it means 'sand dunes.' But the immigrants couldn't pronounce it, so they called it 'sə wäch.' "

But according to a 1995 letter to the editor of the Colorado Central Magazine, the name Saguache means “Blue earth — water at the blue earth.” The writer had written to correct an article in which the word was said to mean "green place", but according to the writer, the word comes from a shortened form of the Ute language word “Saguaguachipa.” The Ute tribe encampments were common in the area around the present-day community and the name "referred to springs in which blue earth was said to be found to the north". The Editors replied: "The Ute Dictionary, published in 1977 by the Southern Ute Indian Tribe of Ignacio, Colo., defines “sagwa-ci” [diacritical marks omitted] as “‘Saguache’, lit. ‘green place’; name of a town in the San Luis Valley in So. Colorado …”

The Colorado State Historical Society has a little different take on the meaning: The note on a community monument: Saguache, “the name derived from the Indian word `Blue Water'."

There were 262 households out of which 26.0% had children under the age of 18 living with them, 45.4% were married couples living together, 12.2% had a female householder with no husband present, and 38.9% were non-families. 33.6% of all households were made up of individuals and 17.2% had someone living alone who was 65 years of age or older. The average household size was 2.14 and the average family size was 2.73. 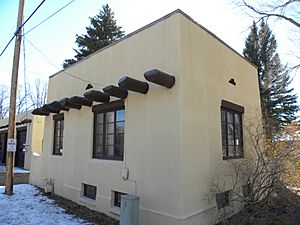 As the gateway to the San Juan Mountains, home to the Rio Grande National Forest and the La Garita Wilderness Area, Saquache offers outdoor activities such as sightseeing, cycling, hiking and camping. Highway 114 to Cochetopa Pass follows the original Old Spanish Trail, offering stunning high country scenery and access to large tracts of public lands. Surrounded by four of the Colorado Fourteeners, Saquache still serves as a last stop for travelers, though of a different sort than those of the past.

Saguache has a small, but excellent, museum. According to the information they provide:

In a tribute to our forebears and in keeping with the work ethic embedded from our agricultural heritage, this Museum has won acclaim from visitors all over the United States, and most foreign countries. They say: “This is the best little historical museum we have ever seen!” Thanks to the handful of devoted folks who care for all the historical collections and items which tell the story of people of this area. The “homey” atmosphere, and the way the collections are displayed make you feel like you have stepped back a hundred years and will give you a sense of what it was like to live in pioneer days. There is something here for everyone, of all ages, to see, learn about, and enjoy."

All content from Kiddle encyclopedia articles (including the article images and facts) can be freely used under Attribution-ShareAlike license, unless stated otherwise. Cite this article:
Saguache, Colorado Facts for Kids. Kiddle Encyclopedia.