Ouray is a Home Rule Municipality that is the county seat and the most populous city of Ouray County, Colorado, United States. The city population was 813 at the U.S. Census 2000 and 1,000 as of the U.S. Census 2010. The Ouray Post Office has the ZIP code 81427. 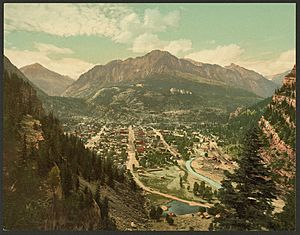 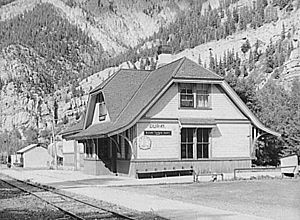 Originally established by miners chasing silver and gold in the surrounding mountains, the town at one time boasted more horses and mules than people. Prospectors arrived in the area in 1875. In 1877, William Weston and George Barber found the Gertrude and Una gold veins in Imogene Basin, six miles south southwest of Ouray. Thomas Walsh acquired the two veins and all the open ground nearby. In 1897 opened the Camp Bird Mine, adding a twenty-stamp mill in 1898, and a forty-stamp mill in 1899. The mine produced almost 200,000 ounces of gold by 1902, when Walsh sold out to Camp Bird, Ltd. By 1916, Camp Bird, Ltd., had produced over one million ounces of gold.

At the height of the mining, Ouray had more than 30 active mines. The town—after changing its name and that of the county it was in several times—was incorporated on October 2, 1876, named after Chief Ouray of the Utes, a Native American tribe. By 1877 Ouray had grown to over 1,000 in population and was named county seat of the newly formed Ouray County on March 8, 1877.

The Denver & Rio Grande Railway arrived in Ouray on December 21, 1887. It would stay until the automobile and trucks caused a decline in traffic. The last regularly scheduled passenger train was September 14, 1930. The line between Ouray and Ridgway was abandoned on March 21, 1953.

The entirety of Main Street is registered as a National Historic District with most of the buildings dating back to the late nineteenth century. The Beaumont Hotel and the Ouray City Hall and Walsh Library are listed on the National Register of Historic Places individually, while the Ouray County Courthouse, St. Elmo Hotel, St. Joseph's Miners' Hospital (currently housing the Ouray County Historical Society and Museum), Western Hotel, and Wright's Opera House are included in the historic district.

Ouray experiences four distinct seasons. Summers are warm in the day and mild to cool at night with brief thunderstorms often occurring in the afternoons in July and August sometimes resulting in intense, though short lived, rainfall. Autumn is cool and mostly clear with occasional rain. Winters are long and cold—though seldom extremely so—with considerable snowfall. Spring is generally cool with early spring often bringing the largest snowfalls; late spring into early summer (mid-May through late June) is mild to warm and is usually the driest time of year. The Köppen climate classification for Ouray is Dfb. 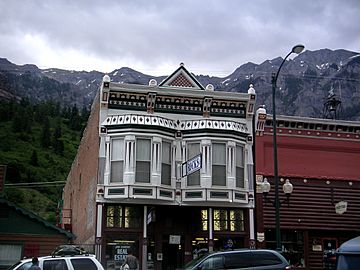 There were 457 households out of which 26.5% had children under the age of 18 living with them, 48.1% were married couples living together, 7.7% had a female householder with no husband present, 6.1% had a male householder with no wife present, and 38.1% were non-families. 32.4% of all households were made up of individuals and 10.9% had someone living alone who was 65 years of age or older. The average household size was 2.19 and the average family size was 2.76. 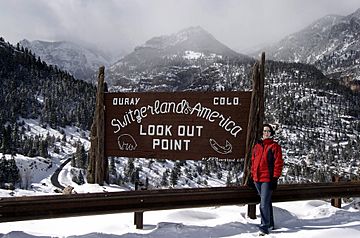 Switzerland of America sign on the Million Dollar Highway

US 550 is the only paved road into or out of Ouray. U.S. 550 begins roughly 40 miles (64 km) north of Ouray in Montrose. It runs south to Bernalillo, New Mexico, via Durango, Colorado, and Aztec, New Mexico. The stretch of U.S. 550 that runs south from Ouray to Silverton is known as the Million Dollar Highway.

Travelers should take caution when adventuring to the isolated town of Ouray, Colorado. The roads are winding and run alongside cliffs the majority of the drive. While the roads may be discouraging, the scenery is phenomenal and picturesque. 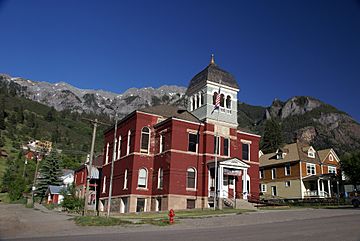 In the fall of 1968 the film True Grit was filmed in Ouray County, including some scenes in the city of Ouray and the nearby town of Ridgway and, most notably, the interior of the Ouray County Court House.

In Ayn Rand's novel Atlas Shrugged, the protagonist's secret hideaway was in a beautiful valley in the Rocky Mountains called Mulligan's Valley or "Galt's Gulch." Galt's Gulch was inspired by Ouray, where Rand found inspiration to complete the novel, though she greatly expanded the small valley to include her many ideas for the story.

In the television series MacGyver, Ouray is the home of MacGyver's grandfather, Harry. The town and surrounds are used as the backdrop for the first-season episode, "Target MacGyver".

Telluride native David Lavender related his experiences working at the Camp Bird Mine in the 1930s in his memoir One Man's West.

Coors and Chevrolet have both filmed commercials in the area, particularly Twin Falls in Yankee Boy Basin.

Famous baseball pitcher Smoky Joe Wood was born in Kansas City but grew up in Ouray.

The opening scene to the movie Over the Top with Sylvester Stallone runs straight through downtown.

The Netflix original series The Ranch, starring Ashton Kutcher, Danny Masterson, Sam Elliott and Debra Winger is set in the fictional town of Garrison, Colorado, but the opening shot of the town during the credit sequence is of Ouray, and the San Juan Valley just north of Ouray.

All content from Kiddle encyclopedia articles (including the article images and facts) can be freely used under Attribution-ShareAlike license, unless stated otherwise. Cite this article:
Ouray, Colorado Facts for Kids. Kiddle Encyclopedia.