The Town of Ridgway is the home rule municipality that is the most populous municipality in Ouray County, Colorado, United States. The town is a former railroad stop on the Uncompahgre River in the northern San Juan Mountains. The town population was 713 at the 2000 census and 924 according to the 2010 census.

Steep forested mountains and cliffs surround Ridgway on the south, east, and northeast. The Uncompahgre River runs through the town and flows into the Ridgway State Park and Reservoir, to the north. Dallas Creek also flows from the south-west and forms a confluence with the Uncompahgre before entering the reservoir. There is a notable wildlife presence — mountain lions, badgers, deer, elk, bears, coyotes, wild turkey, and bald eagles are indigenous to the area. The region's bald eagles nest in the cottonwoods along the river and are a common sight in the late fall.

Ridgway and the surrounding area have featured prominently in pop culture. Most notably the area is the setting of John Wayne's western movie True Grit, and others including How the West Was Won and Tribute to a Bad Man. Ridgway has the only stoplight in Ouray County, at the intersection of Highways 550 and 62. 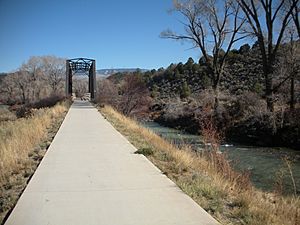 Ridgway began as a railroad town, serving the nearby mining towns of Telluride and Ouray.

The town site is at the northern terminus of the Rio Grande Southern Railroad where it meets with Denver and Rio Grande Western Railroad running between Montrose and Ouray. Ridgway was located about 3 miles (4.8 km) south of the existing town of Dallas. Articles of incorporation were filed on May 22, 1890 and granted on March 4, 1891. This "Gateway to the San Juans" position was recognized over 100 years ago when the Rio Grande Southern established Ridgway as a railhead center servicing the nearby mining towns of Ouray and Telluride. The town was named for Denver and Rio Grande railroad superintendent Robert M. Ridgway, who established the town in 1891.

The Rio Grande Southern filed for abandonment on April 24, 1952 and the Denver and Rio Grande Western abandoned the line between Ridgway and Ouray on March 21, 1953. The line between Ridgway and Montrose was upgraded from narrow gauge to standard gauge and Ridgway continued to be a shipping point until the line to Montrose was abandoned in 1976 as result of a reservoir being built on the Uncompahgre River.

The dam for that reservoir, the Ridgway Dam, was proposed in 1957 as part of the U.S. Bureau of Reclamation's Dallas Creek Project, and its original location would have inundated Ridgway. A 1975 decision to put the dam further downstream kept the town above-water, and residents coined their own nickname, "The Town that Refused to Die." Land around the reservoir became the Ridgway State Park north of town limits.

The river is used for irrigation in the Uncompahgre Valley. The Uncompahgre is unnavigable, except at high water. The name given to the river comes from the Ute word Uncompaghre, which loosely translates to "dirty water" or "red water spring" and is likely a reference to the many hot springs in the vicinity of Ouray. Lake Otonawanda is the primary source of Ridgway's municipal water.

Panorama of the Sneffels Range with Ridgway below 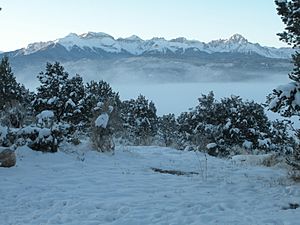 Morning near Ridgway after heavy snowfall

There were 404 households, out of which 31.4% had children under the age of 18 living with them, 51.2% were married couples living together, 7.7% had a female householder with no husband present, 4.5% had a male householder with no wife present, and 36.6% were non-families. 28.7% of all households were made up of individuals, and 4.9% had someone living alone who was 65 years of age or older. The average household size was 2.29 and the average family size was 2.82.

Ridgway is poised on a highway that leads tourists to several other mountain towns of the San Juan region. Ridgway itself is a major tourist town of Colorado. Ridgway is 37 miles east of the ski town of Telluride and 10 miles north of the tourist town of Ouray. The area is also set at the base of the San Juan Mountains providing excellent views especially when viewed from Log Hill Mesa.

The Grammy Award trophy is hand crafted exclusively by John Billings (the 'Grammy Man') of Billings Artworks in Ridgway.[1] The trophies are all hand made, assembled, and plated on site.

Among Ridgway's population there is an assortment of recognizable and famous people.

The closest airport served by scheduled airlines is Montrose Regional Airport, located 28 miles north. Ridgway is part of Colorado's Bustang network. It is on the Durango-Grand Junction Outrider line.

All content from Kiddle encyclopedia articles (including the article images and facts) can be freely used under Attribution-ShareAlike license, unless stated otherwise. Cite this article:
Ridgway, Colorado Facts for Kids. Kiddle Encyclopedia.