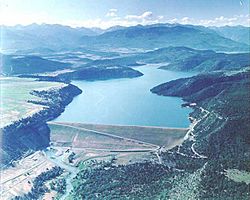 Ridgway Dam was built as part of the Dallas Creek Project. Construction began in 1978 and completed in 1987. The construction of the dam forced the re-routing of U.S. Highway 550 to the east and the abandonment of the Ridgway Branch of the Denver and Rio Grande Western Railroad.

In 2014, work was completed on retrofitting the dam to add a hydroelectric plant. The dam's operator, Tri-County Water Conservancy District, installed two turbines and generators, an 8 kW system and a 7.2 MW system. The larger one is used in summer and the smaller one in winter. The electricity created is sold to the Tri-State Generation & Transmission Association and to the City of Aspen. Construction of the new hydroelectric project cost approximately $18 million. In an average year, the two generators produce about 24,000 megawatt hours of electric power.

All content from Kiddle encyclopedia articles (including the article images and facts) can be freely used under Attribution-ShareAlike license, unless stated otherwise. Cite this article:
Ridgway Dam Facts for Kids. Kiddle Encyclopedia.