Through its subsidiary California Southern Railroad, the Atchison, Topeka and Santa Fe Railway (ATSF) first built a two-and-a-half-story wooden structure on the site in 1886 to replace a converted boxcar that had been used as a temporary station. The 1886 building was mostly destroyed in a fire just after midnight 17 November 1916.

In the pre-Amtrak era the station not only had Santa Fe Railway trains, it also had Union Pacific Railroad trains. The trains of both railroads served disparate destinations in the west and in central United States. 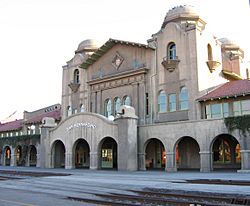 Local politicians requested ATSF to build a new station on a much larger scale than the previous. The new station, designed by architect W.A. Mohr, cost $800,000 (equivalent to $11,321,000 in 2018) to build and was officially opened on 15 July 1918. At that time, it was the largest railway station west of the Mississippi River. The San Bernardino Sun wrote "Santa Fe's Station to be the finest in the west." A few years after the depot's opening, an extension was added that included a Harvey House and living quarters.

The station saw heavy use throughout the 20th century. But like with many railroad stations, there was a gradual decline in usage with the advent of automobiles, buses and air travel. The Harvey House closed in the 1950s. In 1971, the ATSF transferred its passenger service to Amtrak. From 1979 to 1997 Amtrak's Desert Wind (Los Angeles-Las-Vegas-Denver-Chicago) made stops at the station. Metrolink began service to the station on May 17, 1993. 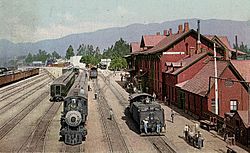 In 1992, San Bernardino Associated Governments (SANBAG) purchased the historic depot from Santa Fe. While Amtrak and Metrolink stopped using the depot in favor for a much smaller newer structure on the west side of the older one, SANBAG acquired over $15 million from federal and local grants and funds to begin an extensive restoration of the historic depot beginning in 2002. In 2004, SANBAG and Metrolink moved some of their offices there. After renovations are complete, SANBAG will share ownership with the City of San Bernardino and both agencies intend on leasing space in it. The historic depot waiting area, along with a new snack shop, opened again for Amtrak and Metrolink passengers on 2 May 2008. A new elevator, platforms, tracks, and an overpass were built in March and April 2017 as part of the Downtown San Bernardino Passenger Rail Project, an extension of Metrolink service to the San Bernardino Transit Center.

All content from Kiddle encyclopedia articles (including the article images and facts) can be freely used under Attribution-ShareAlike license, unless stated otherwise. Cite this article:
San Bernardino Santa Fe Depot Facts for Kids. Kiddle Encyclopedia.