Williams (Havasupai: Wii Gvʼulcode: yuf is deprecated ) is a city in Coconino County, Arizona, United States, located west of Flagstaff. Its population was 3,023 at the 2010 census. It lies on the routes of Historic Route 66 and Interstate 40. It is also the southern terminus of the Grand Canyon Railway, which takes visitors to Grand Canyon Village. There are numerous inns, motels, restaurants and gas stations catering to the large influx of tourists rather than local residents, especially during the summer and holiday seasons.

Also known as the "Gateway to the Grand Canyon", Williams was the last city on Historic Route 66 to be bypassed by Interstate 40. The community, bypassed on October 13, 1984, continues to thrive on tourism. Boasting seven fishing lakes in the area, hiking trails up Bill Williams Mountain and into Sycamore Canyon, an alpine ski area and cross country ski trails, four-seasons weather and an abundance of wildlife, Williams offers unlimited recreational opportunities for the outdoor enthusiast.

The Historic Downtown District covers six square blocks. Williams boasts a rich heritage that features the Old West and Route 66, coupled with tourism trends today and the city's heyday years of the '50s and '60s.

Williams is named after William "Old Bill" Williams, a mountain man and trader who often trapped in the area. 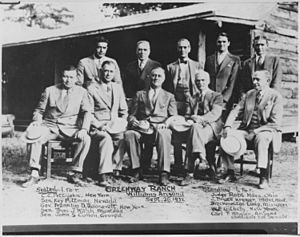 Franklin D. Roosevelt (seated, center) at Greenway Ranch in Williams on September 26, 1932, during that year's presidential campaign. He is accompanied by U.S. Senator from Arizona Carl Hayden standing far right, along with—among others—three Democrats from the U.S. Senate (seated): Pittman, Walsh, and Cohen.

Founded in 1881, Williams was named for the famous trapper, scout and mountain man, "Old Bill Williams." A statue of "Old Bill" stands in Monument Park, located on the west side of the city. The large mountain directly south of town is named Bill Williams Mountain and the Town was incorporated July 9, 1901.

Williams was the last town to have its section of Route 66 bypassed, due to lawsuits that kept the last section of Interstate 40 in Arizona from being built around the town. After settlements called for the state to build three Williams exits, the suits were dropped and I-40 was completed. On October 13, 1984, Interstate 40 was opened around the town and newspapers the next day reported the essential end of US 66. The following year, Route 66 was decommissioned.

Williams Historic Business District and Urban Route 66, Williams were added to the National Register of Historic Places in 1984 and 1989, respectively.

Amtrak‘s Southwest Chief train served Williams between 1999 and 2017, calling at Williams Junction, 3 miles (4.8 km) east of town. Passengers were shuttled from the station to downtown Williams by Amtrak Thruway Motorcoach. Following the closure of Williams Junction in 2018, Amtrak introduced a new Thruway bus service between Williams and Flagstaff.

The surviving downtown station serves as the southern terminus for the Grand Canyon Railway.

All content from Kiddle encyclopedia articles (including the article images and facts) can be freely used under Attribution-ShareAlike license, unless stated otherwise. Cite this article:
Williams, Arizona Facts for Kids. Kiddle Encyclopedia.